By Jay Floyd March 07, 2011
The Phillies have what can only be described as one of the most promising starting pitching rotations in the history of Major League Baseball. Their potential for greatness—not just in the upcoming season but in the foreseeable future—is as large as the price they paid to be in this position, something few teams can say with a straight face.

However, even knowing that great pitching can handily defeat great hitting, the Phillies still have a some hole that needs to be addressed before they can reach that illusive label of greatness.

Now, to check in on your local internet casinos, sports book or other gambling hub, you’ll notice instantly that the Phils’ odds of winning the World Series far surpass any other team’s odds at this early juncture. But let’s not allow expectation to tell the tale. Potentially, there’s still a hole out in right field due to Jayson Werth’s decision to abandon the club for division rival—not on the same level, but still a rival—Washington, when he signed with the club for a whopping $126 million over 7 years.

Maybe Werth was not Philadelphia’s best slugger, and we’ll make no gestures of grandeur for the dearly departed, but .296, 85 RBI and 27 homers in 2010 certainly isn’t chump change. That’s big-time production for any player outside of an elite handful.

To fill this noticeable void, Phillies manager Charlie Manuel is looking at a pair of much more affordable players to do the job. Those individuals are rookie Domonic Brown and Ben Francisco, who is set to make just $70,000 over the Major League minimum of $400,000 this season.

Brown, however, fractured the hamate bone in his right hand in a Grapefruit League contest this past Saturday against the Pirates. He has returned to Philadelphia and is scheduled to undergo surgery on Tuesday. Brown is expected to miss up to 6 weeks, as he recovers. 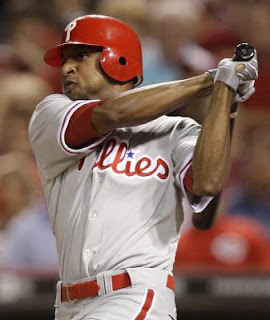 So, while Manuel and the Phillies coaching staff had previously been prepared to allow Brown and Francisco compete for the starting right field job throughout spring training, Brown's injury and Francisco's .320 average, 2 HR and 6 RBI thus far in 9 Grapefruit League games have virtually locked the man they call "Benny Fresh" into the role of starter. This isn't big league style internet roulette. This is pretty much an easy decision helped along by process of elimination.

Brown, who was working on a new approach at the plate, was batting just .063 in 8 spring training games prior to the injury. Once he recovers from the procedure, Brown should get the opportunity to bounce back slowly in the minors, without the pressure of competing along side established Major Leaguers with the pressure of earning a spot on the Phillies' opening day roster. Until then, it will be Francisco's duty to be an ample shoe-filler for Werth in the Phillies outfield.