Mattair was the Phillies' second round draft pick in 2007 out of Southridge High School in Washington state. He later helped the Class A Lakewood BlueClaws win the South Atlantic League championship in 2009. After a rough spring training in 2010, Mattair, who was an all-state basketball player during his high school days, retired from baseball to chase his dream of playing Division I college hoops.

After a year off from baseball and spending last summer with the Boise State University men's basketball, Mattair is back in Clearwater ready to start another season in the Phils' organization. He played in the Phillies' Major League spring training game this past Saturday against the Blue Jays and has described the event here for you readers. 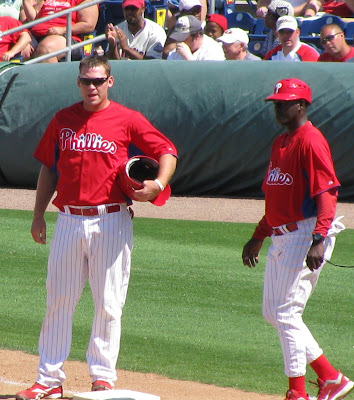 To tell the truth, a while ago when my dad was making plans for his trip to come see me play in spring training, all I could think of was maybe his visit will coincide with a split squad day or maybe I could get called to play for the big league club for a day while he's here. It would mean so much to me, if my dad was here to see it. And sure enough, this past Friday with my dad in town, I looked at the list for Saturday's travel and game assignments, and the Phillies' list had my name on it.

During the game, the coach came to me and told me I was going in to play third if we went 1-2-3 in the seventh inning, and we did, so I got to go in on defense. It was a little more nerve racking to be out there in front of big league fans on that stage, especially for me, since I haven't been in front of any crowd playing baseball in well over a year.

After the half inning in the field, I went back in the dugout and the coach came back up to me and said, "Hey, you're batting in Howard's spot," which put me up fourth that inning. I thought, "If someone gets on, I'm gonna get up to bat in a key spot, down 3 runs." I was really hoping I got a plate appearance.

The first guy got on and I was thinking, "Shoot, I get an at bat!" The second guy got on and I got more excited. Then the third guy got on to load the bases and I got focused and thought, "Alright. Let's do this!" I got in there and kept telling myself to stay calm and relax my hands and let my instincts take over.

I faced righty Casey Janssen and wanted to see a couple pitches, which allowed me to savor the moment. I saw a breaking pitch for ball one. I saw a pitch down the middle that, at the time, I wished that I had hit. I saw a couple more pitches. He got me with a fastball in, that I fouled off to the right side. Then I got a hanging slider that I hit up the middle, driving in two runs and to get us within a run and it was unreal. Just to hear the crowd, to feel the energy when I got to first base and to take a peek up at my dad in the stands from there and seeing the smile on his face...it was a proud moment for him and it was a proud moment for me. I know it was spring training, but it meant a lot to me to have my dad there for my first big league at bat. It was just a wonderful feeling and it's definitely something my dad and I will share for a long, long time.

Winning the championship with the BlueClaws in 2009 was awesome and making my professional debut was great, but to be in that situation when a year ago I wasn't even playing baseball, and to have everything come back around and one year later I'm playing in a big league spring training game, I would say that it's the top moment of my baseball career.

After the game I went in the locker room and checked my phone and all my aunts and uncles and cousins, they were watching on MLB.TV, on the internet, back home. So, that meant a lot to me too. And I got calls from my brother and my mom. It was just a really great moment, and it made me realize that this is what I am supposed to do. I am just so excited to be back playing baseball and I want to have many, many more at bats as well as many, many more RBI in the big leagues, so I just have to keep putting the work in so my family can keep watching me on TV every night, not just once in spring training.