By Jay Floyd March 16, 2011
It's not quite St. Patrick's Day yet, so I am assuming that most of you do not yet know what you may have planned for Tuesday night, August 2nd. Well, I am here to tell you what you SHOULD BE doing that. How about attending a Reading Phillies game at First Energy Stadium?

Reading will be the place to be in the region that night, as the R-Phils giveaway a Carlos Ruiz "Chooching Owl". The hybrid bird/world champion backstop will don the uniform of the Double A affiliate of the Philadelphia Phillies and be capable of hooting Carlos' nickname, Chooch. 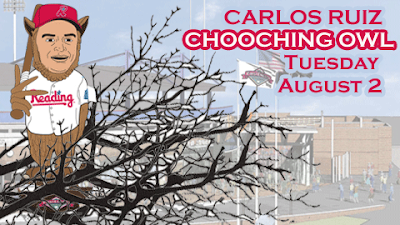 Presented by FirstEnergy, the guaranteed highlight of the giveaway schedule will be provided to the first 3,000 adults in attendance that night. You can click here to order your tickets.

Other noteworthy promotions by the Reading Phils this year include April 14th, when the club will give away Ryan Howard garden gnomes. That same night, one lucky fan will receive a larger than life 550-pound Ryan Howard garden gnome to call his or her own. A Cole Hamels garden gnome will also be given away on June 20th. In addition, the R-Phils will host Darren Daulton for an appearance on June 1st, and "Mr. Belding" will appear on June 22nd.