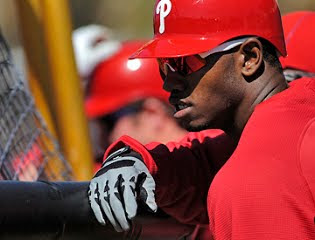 Reports out of Clearwater today have Domonic Brown headed back to Philadelphia to meet with team doctors after X-rays showed that he has a fracture of the hamate bone in his right hand.

Brown left Saturday's game against the Pirates shortly after he snapped an 0-for-15 slump with his first Grapefruit League hit, a single off Pittsburgh hurler Paul Maholm.

According to Phillies.com's Todd Zolecki, surgery is likely for Brown, who is the Phillies' top prospect, and he could return to baseball activities in up to six weeks.

Update: PhilliesNation.com's Paul Boye' found this nugget in an ESPN.com chat (scroll down to 1:03), where baseball insider Keith Law states that the typical return to full power following a hamate injury is 12-18 months.