Vote For PhoulBallz in the 2011 "Phield" Tournament

By Jay Floyd March 22, 2011
March Madness is upon us once again. But, I don't mean the college hoops variety, baseball fans. The madness I am referring to is the wild bracket that pits all the best Philadelphia baseball blogs against one another in a winner-takes-all bragging rights fest.

**Now in the third round, PhoulBallz has advanced to the Sweet 16 of this tournament. Click HERE to vote!**

This site, PhoulBallz.com, brings the public closer to the Phillies on a daily basis, as it covers the organization from the bottom to the top. Please allow me to share with you, a list of reasons that PhoulBallz deserves your vote in the The Phield's 2011 Tournament.

1- In the past year, this site has brought its readers TWO exclusive interviews with the Phillies' general manager, Ruben Amaro Jr. No other site has done that. Those interviews can be heard HERE and HERE.

2- Speaking of interviews...PhoulBallz has media access, thanks to its affiliation with Millennium Radio Group's Shore Sports Network. Along with that access comes this list within the list of other interviews that this site has produced within the past year....Joe Blanton, Ryan Howard, Brody Colvin, Jarred Cosart, Billy McMillon, Jiwan James, Vance Worley, Mark Parent, Dickie Noles, Tyson Gillies, world famous rock band Les Savy Fav as well as dozens more, including THIS INTERVIEW with Phillies catcher Carlos Ruiz. I asked Carlos about the famed "Ice Cream For Chooch" animation created by my pal Tug. It was quite possibly the single best Phils blog moment of the past year. Additionally, do you know which Phils blog brought its readers an exclusive interview with last year's Hall of Fame inductee Andre Dawson? THIS SITE!

3- Players post diary entries here, on PhoulBallz. Whether it's Moose Mattair's chronicle of his cross country journey from Washington to Clearwater or Jake Borup documenting life in spring training, PhoulBallz brings you exclusive inside access to prospects within the Phillies' system.

4- PhoulBallz brings fans exclusive player features that tell stories that no one else can. Need to know why that former number one draft pick is struggling? I'll ask him. Ever ponder about what sorts of jobs the minor leaguers who don't get $900,000+ signing bonuses do during the off-season? I'm on it. Wondering about that Phils prospect who retired from baseball to go play college basketball? We've got that. Craving tales about players' family lives and how baseball fits into them? That's certainly the sort of stuff this site gives you (here and here). And have you ever wished to keep tabs on departed prospects and their abilities to grow sweet facial hair? Yours truly has it covered.

5- PhoulBallz pays tribute to the past unlike any other site. The history of the great sport of baseball is one of its most appealing aspects. Regular readers get frequent lessons on the past of the Phillies organization, via the great Sunday School posts. Examples of those entries can be found by clicking here and here.

6- The top Phillies prospect not named Domonic Brown confirms that PhoulBallz.com should be your destination online for baseball information. Listen to what 2010's most outstanding prospect from the South Atlantic League, "The Boss" Jon Singleton, has to say about it below.

7- And...More players want you to vote for PhoulBallz in The Phield. This week, via Twitter, future bullpen force Justin De Fratus, top pitching prospect Jarred Cosart and 2010 draft pick Jake Borup all declared their support for PhoulBallz.com in the 2011 Phield tournament. 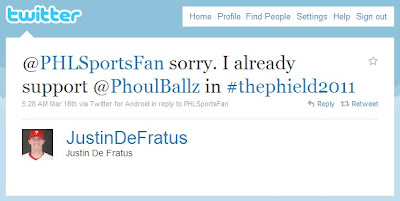 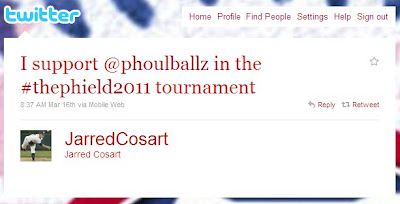 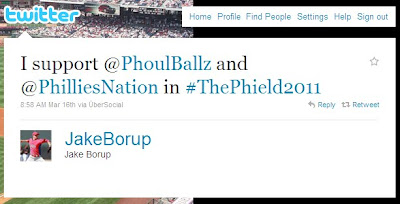 To view the full bracket and to show your support by casting a vote for PhoulBallz.com in the second round of The Phield tournament, visit http://thephield.wordpress.com/ and vote in the embedded polls on their site. While you're at it, if you wish to support one of my other internet homes, PhilliesNation.com, that would be grand also.

Thank you for your support.