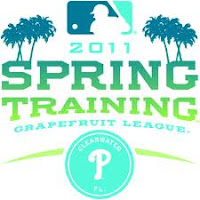 Friday morning, the Phillies trimmed their roster in Major League camp by sending seven men across the complex to minor league camp. Pitchers Mike Stutes, Juan Perez, Vance Worley and Dan Meyer, infielders Freddy Galvis and Jeff Larish as well as outfielder Brandon Moss will all report and be assigned to their respective teams.

Stutes, a right-hander, was extremely impressive in Grapefruit League action with the Phillies. Stutes appeared in 5 games (1 start) and allowed just 1 earned run in 9 innings pitched (1.00 ERA), while he struck out 9 batters and walked just 1 batter. Stutes is likely to see some time with the big club this season, as needs arise in the bullpen.

Left-handed hurler Juan Perez appeared in 5 games with the Phillies this spring and allowed 1 earned run in 5 1/3 innings, while striking out 5 and walking 4. The 32-year-old Perez was signed as a free agent in November.

Righty Vance Worley, an Eastern League All-star each of the past two seasons for the Phillies' Double A affiliate in Reading, had appeared in 4 games with the Phils and posted a 3.86 ERA. In 9 1/3 innings, Worley had given up 9 hits, walked 4 and struck out 6. Worley made his Major League debut with the Phillies last season.

The left-handed Meyer, a New Jersey native who previously pitched in the Majors with Oakland, Atlanta and Florida, had appeared in 5 Grapefruit League games and posted a 2-0 record. His ERA, however, wasn't as sharp at 6.75 in 5 1/3 innings.

Shortstop Freddy Galvis hit a 2-run homer in Philadelphia's game against Toronto on Thursday, but it wasn't enough to keep him around big league camp, as his .182 bating average in 12 games was all the Phillies wished to see from him at this point. Galvis, who is known for his defense, had 3 RBI and a .240 on-base percentage this spring with the Phils.

Larish, who batted .179 in the Majors last season with Oakland and Detroit, was 2-for-20 (.100 avg.) in 10 games with the Phillies this spring. Larish, 28, is a first baseman and third baseman that could offer the Phils depth at the Triple A level.

Moss, a lefty hitter that played in the Majors previously with Pittsburgh and Boston, batted .167 with 2 doubles and 5 RBI in 12 games with the Phillies in Grapefruit League play.


Additional news out of Clearwater states that Phillies radio voice Scott Franzke has signed a contract extension that will keep him with the club through the 2016 season.