By Jay Floyd March 14, 2011
The following is an exclusive guest post by Phillies pitching prospect Jake Borup. From time to time, Jake, who was selected in the 23rd round of the 2010 amateur draft by the Phillies out of Arizona State University, will join us to share his thoughts on his life as minor leaguer. To check out Jake's previous diary entry, click here. 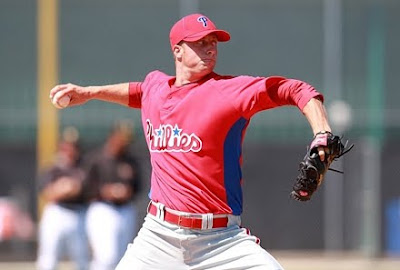 Just wanted to share some thoughts about MY first spring training with the Philadelphia Phillies.

My wife Kyrstin and I packed up the car in Phoenix, and made the journey across the country. We left on a Thursday morn and got to Clearwater on Saturday afternoon. When we got here, it looked like a complete transformation from when I was last here in October for instructional ball. EVERYTHING is Phillies. Phillies this, Phillies that. Wherever I go, I see something Phillies. It is pretty special to be a part of an organization with such an awesome fan base and wide appeal. Just the vibe in the Clearwater area got me excited to start working out. What I didn’t know is that I would be getting my fair share of working out soon enough.

The first official week of Spring Training has been crazy to say the least. I didn’t really know what to expect other than we would be doing a lot of shagging for the hitters during batting practice. Honestly, we haven’t even done much of that so far either. It’s been a lot of early mornings, a lot of stretching, a lot of conditioning, a lot of meetings, a lot of ham sandwiches on Rye (oxy moron??), and some baseball mixed in. The first few days, we spent a lot of time dealing with health issues to get everyone cleared to be on the field and start practicing. Finally on Monday, we got things rollin…Jimmy Rollin.

A typical day is breakfast at 7, early work at 8, orientation at 9, from 9:30-12 we stretch, play catch or long toss, pitchers fielding practice and other defensive drills, shag for hitters and condition. Conditioning typically lasts 20-30 minutes. Then we eat lunch around Noon thirty. Lunch usually consists of sandwiches or wraps and every once in a while they’ll break it down for us and get us a nice meal with salads, chicken, rice, and beans. After lunch, which goes by entirely too quick, we will have some sort of bullpen or intrasquad games. This week, intrasquad games will be replaced with actual games. VERY NICE!! (Borat voice). All in all, my first official week in Spring Training with the Phillies has led me to a lot of good routines and ibuprofen. It’s fun being at the field with the other players. We are all starting to get a sense of camaraderie. It’s competitive, but in a good way.

One of the highlights of the week was when we had the chance to hear from the front office on the 1st official day, one week into camp. Team president David Montgomery, general manager Ruben Amaro Jr., Phillies manager Charlie Manuel, assistant GM Chuck LaMar, and trainer Jon May were all in attendance. We had the privilege to hear from Charlie Manuel as well as others. One of the things he said that stuck out in my mind was that he “learns something new every day from Roy Halladay”. Now, for those of you that don’t know the extensive background that is Charlie Manuel’s experience in baseball, let me tell you he has been in the game for over 50 years. He bleeds baseball. It is his life. And for someone who has that kinda background to say that every day he learns something new about the game speaks volumes about that person.

Now, most readers should know about the accomplishments of Roy Halladay on the field, but I sat there and thought to myself that he must be quite the person if he’s teaching so many people about baseball. I have never formally met Roy, and look forward to the day when I do. However, I do know a few things about him that impress me beyond description. He does not say a lot, so obviously he teaches people by example. He works incredibly hard, and sticks to his routines. It is pretty awesome to be so close to all of the guys I’ve looked up to during my baseball years. That’s one of the best parts of Spring Training- watching the big leaguers work.

On a less spiritual note, I got a lot of work to do. Things are coming along good, but I always have to keep telling myself that it’s a marathon, not a sprint. I am taking things in stride and trying to get a little better every day. The biggest thing for me is to establish command of my fastball on both sides of the plate and throwing my off speed pitches where I want to. I had the chance to face hitters for the first time in 6 months and I was a little rusty. Didn’t think I would be, ‘cause of course I think I’m gonna dominate everyone that steps into the box, but I felt a little out of whack. It will take a few more outings till I feel I have a grasp for things. Hopefully I don’t get waxed in the process. Pitching takes patience, but I like where things are headed. Monday starts a new week and our squad is headed to Dunedin to take on the Blue Jays. I’m scheduled to throw and inning, maybe two, but who knows. Either way, it’s awesome that I get to put on the Phillies uniform and play ball. Gonna be a great spring!

If y’all like what you’ve read and wish to connect with me online, hit me up on that twitter piece… @JakeBorup.

Do you want to watch Scream 4? It is not released yet but you can watch it online already!