By Jay Floyd March 25, 2011
In Clearwater on Friday, the Phillies continued a hot spring and beat the Braves 3-1 to continue leading National League teams in the Grapefruit League in wins with 18.

Joe Blanton shined in the contest, throwing scoreless inning in which he allowed just 5 hits, no walks and struck out 4 batters. In addition to dominating on the mound, Blanton added a single at the plate for the defending NL East division champions.

The Phillies took an early 2-0 lead in the first inning when, with Luis Castillo on base, Jimmy Rollins mashed a pitch from former Phils hurler Rodrigo Lopez deep to right and out of Brighthouse Field.

Ryan Howard added a run in the 3rd inning, when he drove a towering fly ball off the top of the left-center field wall for a triple, plating Rollins.

Placido Polanco played three innings for the Phils at third base and went 0-for-2. Polanco had missed time over the past week with left elbow soreness. 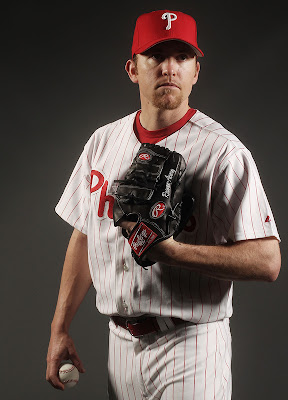 Additionally, the Phillies announced Friday that, for the third time in four seasons as a member of the team, Brad Lidge will begin the season on the disabled list. Lidge has been experiencing recurring pain in his right shoulder and is targeting a period of rest, in order to allow some time to heal.

The right-handed closer pitched against the Twins in the Phillies' exhibition game on Thursday, after sitting out roughly a week, and allowed an earned run in 2/3 of an inning. With Lidge's ERA sitting at a hefty 9.53 in six Grapefruit League games, it is clear that the 34-year-old likely hasn't been at 100% throughout spring training.

Unsure of when the issue initially began, Lidge speculated that he first injured the shoulder early in spring training.

"I don’t know where I did it," Lidge said, when speaking of his ailment. "I’m sure it was in those games early."

Lidge joins all-star second baseman Chase Utley and prized rookie outfielder Domonic Brown as Phillies that will be out of action next Friday for opening day. Lidge is scheduled to be examined by team doctor Michael Ciccoti on Saturday and have an MRI on Tuesday, when the team returns to Philadelphia.

Lidge is hopeful that he'll be ready to see game action before too long and expressed optimism to only miss a couple of weeks of the season.

"Hopefully it’s a mid-April thing," Lidge told the media. "The MRI and Dr. Ciccotti’s review will tell us what we need to know."

If Friday's victory against the Braves serves as any indication, Phils' manager Charlie Manuel could be leaning toward using right-hander Jose Contreras as the substitute in the closer role, as Ryan Madson was used in his usual role of set-up guy in the 8th inning and "The Big Truck", Contreras, pitched a perfect 9th inning to earn the save.

-Blanton's spring ERA of 3.21 is second to Roy Halladay's 0.48 among Phillies starting pitchers.

-Luis Castillo notched his first hit in a Phillies uniform. Castillo went 1-for-2 in the contest with 2 walks and a run scored. He is now 1-for-10 with the Phillies in 3 games.

-Despite going 0-for-4 on Friday, Shane Victorino is batting .309 in Grapefruit League play.

-Contreras has struck out 9 and walked NO batters in 8 innings pitched in Grapefruit League games this spring.