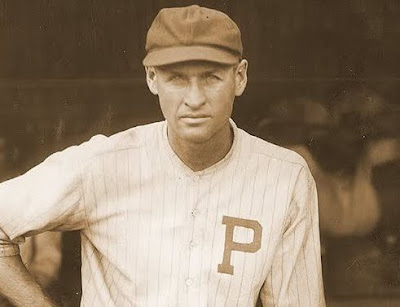 Frederick Cyrus "Cy" Williams was an outfielder with the Phillies from 1918-1930. Williams was signed out of Notre Dame University by the Cubs and skipped the minor leagues, going straight to the Majors out of college. Following the 1917 season Williams was traded by the Cubs to the Phillies for Dode Paskert.
The move to the Phillies was a good one for Williams, as he spent time on Chicago's bench. After locking down a spot as the Phillies' starting centerfielder, Cy Williams excelled. His lefty swing matched up well with the short right field porch in the Phils' home park, the Baker Bowl. Manager Bill McKechnie called Williams, "the most consistent dead right-field hitter I ever saw". He was dubbed "the Babe Ruth of the National League" by some sportswriters, for his penchant for slugging homers. Williams led the NL in homeruns four times during his career. During the decade of the 20's Williams hit 202 homeruns, a huge amount at the time.
Williams' tendencies to pull the ball led to opposing defenses putting on a shift, in the field. It didn't have much of an impact as Williams batted .320 or better in 5 of 7 years from 1920-1926.
During a time when the Phillies were often among the lowest scoring teams in the NL, Williams' power was one of the only reasons for Phillies phans to go to the ballpark. In a May, 1923 game, Williams smashed 3 homers off of the Cardinals. That same month, Williams drove in 44 runs, which still stands as the team record for a single month. Also in 1923, Williams became the first Phillie to hit 30 homeruns and drive in 100 or more runs in a single season (41 homers and 114 RBI when it was all said and done that year). He did all this for a last place club that won all of 50 games.
In 1926, Williams became the first Phillie to homer in 4 straight games. In 1927, the year he turned 40, Williams hit for the cycle against Pittsburgh. Over his 13 years with Philadelphia, Williams played 1463 games, hit 217 homers, drove in 795 runs and had a .306 batting average.
Cy Williams was inducted into the Phillies Wall of Fame in 1986.
-----------------------------------
Follow PhoulBallz.com on Twitter HERE for unique Phils facts, other updates and our Name That Phillies Autograph game!