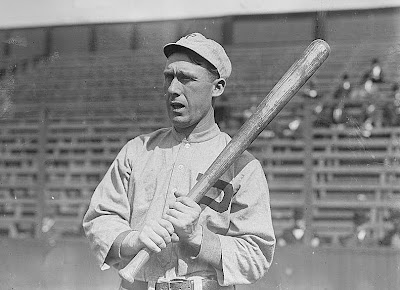 John Titus was an outfielder for the Phillies from 1903-1912. Titus was likely best remembered for his durability and quirky mannerisms. An older rookie at 27 years old, Titus didn't miss a start for nearly 8 years, once he joined the Phillies' lineup.

A nickname given to Titus by his teammates was "Silent John", for his quiet demeanor. Teammate Kid Gleason once joked about Titus, "He doesn't even make any noise when he spits." On a Phillies roster full of loud personalities, Titus let his game efforts speak for themselves.

Another nickname Titus acquired was "Toothpick Titus" for his habit of taking the field with a toothpick dangling from his mouth. Titus claimed he needed the toothpick to dislodge the chewing tobacco that would become stuck in his teeth throughout a game. Opposing pitchers, at times, tried to separate Titus and his toothpick, by pitching inside and knocking him to the dirt. No one ever succeeded.

In early 1911, Titus suffered a broken leg, while sliding home and he missed six weeks. When he returned from injury, Titus' speed decreased and he was no longer an everyday player. In June, 1912 Titus was traded to the Boston Braves for outfielder Doc Miller. After the 1913 season with Boston, Titus was done in the Majors. He would continue to play parts of two more seasons in the minors before retiring.
------------------------------------
Follow PhoulBallz.com on Twitter HERE!