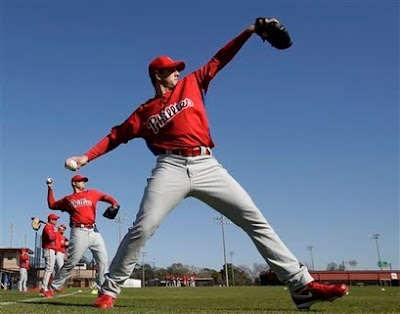 Scott Mathieson, the one time Phillies pitcher who has been recovering from elbow surgeries for over three years, is finally close to a return to the Majors. Mathieson, a 17th round selection in the 2002 amateur draft, appeared in 9 games, 8 of which were starts, for the Phillies in 2006. Late that season, Mathieson suffered an elbow tear, for which he needed Tommy John surgery. In the recovery process, he felt more arm trouble. A second Tommy John surgery was required, in addition to another arm procedure. Mathieson spent the 2009 season working his way back through the minors and is now in camp with the big club.

When I spoke to Mathieson last August, while he was pitching with the Double A level Reading Phillies, Mathieson talked about the things he learned during his rehab process- patience, mental toughness and learning how to pitch...the mechanics & finesse of things, not just throwing. Scott also improved his change up, which he now feels is one of his better pitches. All of this should prove to be advantageous for Mathieson, as he tries to complete his comeback.
Asked about Mathieson yesterday, Phils pitching coach Rich Dubee said the following, "Last year he pitched with big time velocity. But again, he's on a learning curve where I don't want to say he has to make up for lost time, but he still needs innings and needs experience. He needs to get out there and pitch on a regular basis. You can't make up for experience. You need to get on a mound and pitch, and that's what Scotty needs to do. Knock on wood, he's been healthy. Tremendous work ethic. He's had two ligament replacements."

Follow PhoulBallz.com on Twitter HERE for unique Phils facts, other updates and our Name That Phillies Autograph game!