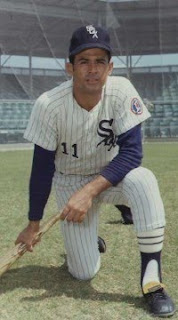 Aparicio, also a shortstop, was the American League Rookie of the Year in 1956, a 10-time all star, a 9-time Gold Glove Award winner and was inducted into the Hall of Fame in 1984.

Vizquel, an 11-time Gold Glove Award winner, has worn number 13 with other teams during his career, but in Chicago, that number belongs to manager Ozzie Guillen.

The inquiry was made when Vizquel reached out to Aparicio, requesting his approval of an effort to honor the long retired legend. In a statement, Vizquel said, "For me, it's like a huge celebration, trying to keep his name alive and trying to spread the word of Venezuelan shortstops." Unfortunately, Vizquel couldn't be bothered to think of another more proper way to pay homage to those that came before him and Aparicio couldn't find it in himself to deny such a request, the way he should have.

Hey, Omar...if you'd like to teach today's younger fans about the great players of past generations, why not get the White Sox to post images at the ballpark to pay tribute to guys like Aparicio? Wait...uh, what? They already do that? Oh...well, how about requesting that the White Sox have a throwback day to recognize players like Aparicio? Why not host a dinner for all-time great White Sox and invite some media and season ticket holders...or do the same for retired Venezuelan greats, if that's your angle? Why not petition the White Sox pay tribute to such players with a giveaway or old timers' event?

Vizquel is the all-time MLB leader in games played at shortstop, is the all-time leader in hits by players from Venezuela (a record previously held by Aparicio before last season) and likely will get his own place in the National Baseball Hall of Fame some day. Perhaps that is why Aparicio was willing to allow Vizquel to wear the number, however, jersey numbers get retired for a reason. The honor is in the retirement of the number...not in some other player wearing it. I appreciate that Vizquel asked and that Aparicio approved, but wearing the number again squashes all previous ceremonies and efforts to commend and distinguish a player like Luis Aparicio.