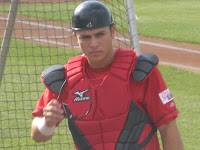 The combination of blockbuster moves that landed Roy Halladay for the Phillies, in December, included a trio of players being sent from the Phils' minor league teams to Toronto. That trio was top pitching prospect Kyle Drabek, 5-tool outfielder Michael Taylor (who was promptly dealt to Oakland for third baseman Brett Wallace) and...who was that other guy? Well, regular PhoulBallz readers are plenty familiar with that other guy, Travis D'Arnaud. Travis was a big part of the Lakewood BlueClaws team that won the South Atlantic League title in 2009. He was also regarded highly enough to be invited to big league camp with the Blue Jays in Dunedin, Florida. I recently spoke with Travis about his off-season, his new team and other topics. Continue downward, and read all about it!
Travis, how did the big trade effect your off-season?
The trade only effected my off-season by having me travel to Florida for a physical at a moment's notice. I got a call the day after all of the trade talks were being thrown around and they asked me to come to Florida so they could finalize the trade after I had a physical and MRI. Other than that my off-season still consisted of working out, playing baseball, and enjoying my time with my family and friends. Off-season for me is a way for me to fall in love with baseball more and more as each year goes. It's because I don't get to play baseball for a few months and it drives me crazy. So, my off-season this year was similar to the past two off-seasons I have had.

What is your impression of the Toronto organization thus far and what differences, if any, have you noticed between there and the Phillies' system?
The Toronto Blue Jays, just as the Phillies system, is a class organization. They really emphasize working on your game and getting stronger. Getting stronger leads to hitting the baseball further and even throwing a baseball harder as long as you do the correct workouts. Everyone has also been very friendly to Kyle (Drabek), Brett (Wallace) and me. The only real differences I have noticed are the faces at the field everyday. Everyone is new, so I get to enjoy chatting with them and we introduce each other. Other than that, it's still going on the field everyday and doing what I love.
Describe some of the work you did this off-season to help yourself improve.
In the 2009-2010 off-season, I really made sure I was in the best shape of my life. My past two spring trainings I wasn't at my peak physical condition, so I made sure to workout really hard this off-season. I worked out in the weight room everyday and went to the field to hit everyday. On the other hand, I took a month or so off of throwing to let my arm rest and get ready for the 6 month season. This is the first spring training I feel ready for April and feel like I can still be in shape when October comes around and when the games really count.


Did you look forward to this spring training any differently than previous seasons?
I was really looking forward to this spring training because it is my first one in big league camp. Every other year prior to this year I have been in minor league spring training. Being in big league camp gives me the same instruction the big leaguers get. Also, being around them gives me an opportunity to ask questions and get a better feel for the game. Also, it lets me see how big leaguers go about their business. They all have a certain routine they stick to and it gets them game ready.
With the access to new teammates and coaches, on a completely new club, is there anyone specifically you are looking forward to learning from down there?
I am definitely looking forward to talking with John Buck and Jose Molina. They are two veteran catchers who are really experienced and know how to handle a pitching staff. I'll be asking a lot of questions about the little details in baseball. Also, I'm excited to learn from any big league coach as well. They know a lot about the game and I have so many questions.
As your career rolls on, who will you hold in the highest regard from the Phils' system for having helped you the most and why?
Mike Compton and Dusty Wathan are definitely the coaches who have helped me with my catching and knowledge of the game. All of Compton's drills speed up my brain so, when the game comes around, it slows everything down. He also has made sure I have a great work ethic and take command of the pitching staff. Dusty was my coach for two seasons. He helped me as far as game calling and handling a pitching staff as well. He also made sure I was always loud on the field and made sure I was a leader. Without these two coaches, my skills wouldn't be as fine tuned as they are now.
I talked to the other Travis, "Moose" Mattair, and he is excited at the possibility of playing against you this coming season. Do you think there are any tendencies of former teammates that you are familiar with that you could use to your, and your pitchers', advantages? Vice versa...?
Moose is one of my close friends I have made since I was drafted in 2007. We both were in the GCL together and ever since then we've pretty much clicked. We get along so well and it also helps that both of our names are Travis. I would be so excited to play against the Clearwater team. As far as tendencies go, I'm pretty sure that my old teammates will know that I know their tendencies so they will be sure to change them. When Jason Knapp was traded last year, the BlueClaws played against his team and we knew he told them our tendencies. So we changed everything up, so the other team was confused.

You recently celebrated a landmark birthday on February 10th. Any details to share about that?
My 21st birthday was a very excited moment. I was in Dunedin, working out prior to my birthday. The day before the big day, I flew home to celebrate with my family and friends. Then, I said goodbye to all of my friends and family and came back to Florida to get ready for Spring Training.
What would you most like to get out of your 2010 season?


Lastly, what is your fondest memory of your time spent in the Phillies organization?
My fondest memory with the Phillies was my first day walking in the clubhouse. Two of my close friends were the first to come up to me and welcome me. At first I didn't know either of them, except from reports on the draft. One of them was a guy from Oxnard, California. I have been to pre-workouts with him prior to the 2007 draft. The first day I met him he was wearing a shirt that said "Bucs" on it, so that is how I knew him. His name is Justin De Fratus. The other was a huge 18 year old who I only have heard about his stellar defense and really deep voice. When he came up to me with a huge smile, he introduced himself as "Moose Mattair." These two guys made my first day feel like home and made it easy for me to transition from being in high school one day to living on my own the next.
-------------------------------
Click here for previous content featuring Travis D'Arnaud.
I will be back on the weekly radio spot starting today, with Fox Sports 1310 AM and WOBM AM 1160. Tune into The Shore Sports Report from 3-6pm on the air near the shore or via live web stream! I should be on the show around 4:20pm today.
Tons more exclusive PhoulBallz.com interviews, with the likes of JC Romero, Pedro Martinez, Greg Dobbs, Kyle Drabek, Michael Taylor, Clay Condrey, Domonic Brown, Mike Zagurski and tons of other players, can be found by clicking RIGHT HERE!
You can follow PhoulBallz.com on Twitter HERE!