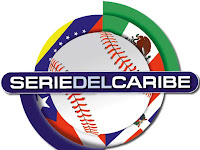 The culmination of the baseball winter leagues is upon us. Beginning this afternoon, the annual Caribbean (World) Series will pit the league champions from Mexico, Puerto Rico, Venezuela and the Dominican Republic. Mexico & Puerto Rico will face off, while Venezuela faces the DR on the first of six days for the series. Venezuela's Margarita Island will play host to the event.

After months of highlights, classic games and hot stove coverage...LIVE baseball will return to television today. All games of the Caribbean Series will be broadcast on MLB Network. Those stuck at work or away from their television will be able to follow each game via MLB.com's game day feature.

Not sure who to root for? How about the Leones from the DR? Recent Phillies pitching acquisition Jason Standridge is on the Dominican pitching staff. In 4 games this winter, Standridge has been excellent, going 2-1 with a 1.09 ERA and 21 strike outs in 24 2/3 innings pitched. Switch hitting outfielder Freddy Guzman is also on the Dominican squad. Guzman is batting .259 with 4 RBI and 7 steals in 14 games this winter. Standridge and Guzman were both signed this offseason to increase depth in the minors. Former Phillies infielder Juan Bell is also the hitting coach for the Dominican champs. Also on the Dominican Republic team are former Phillie, and current Metropolitan, Nelson Figueroa as well as Marlins utility man Emilio Bonifacio.

In a bit of a twist, the series allows the champions who enter the Caribbean Series an opportunity to reenforce their rosters with additions who weren't actually on their roster during their nation's season. One addition that the Dominican team has made is Pablo Ozuna, who was a 2009 Phillies minor leaguer and illegal drug offender/suspendee. Ozuna is the expected starter at second base for the DR team.

Also in the series, former Phillies Chris Roberson and Karim Garcia are on the roster of the Mexico champions. And the championship team from Venezuela also features some names familiar to Phils phans...Eric Junge and Yoel Hernandez, who were each Phillies pitchers in 2002 and 2007 respectively. Lastly, former Phillies minor leaguer & Trenton Thunder slugger and current Blue Jay Randy Ruiz is on the Puerto Rican team's roster.

The Dominican team is typically favored, as they have walked away with 17 total Caribbean Series titles, 11 since 1990. Tune in daily, today through Sunday, February 7th for all the winter baseball action. Mitch Williams will be on the commentary for MLB Network throughout the series.