Team USA All the Way! 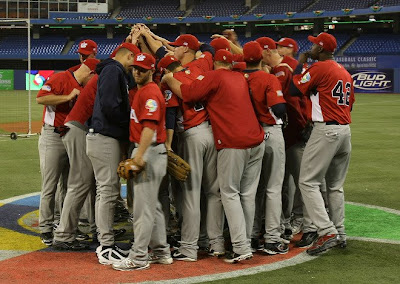 Once again, in conjunction with IronPig Pen and Swing and a Long Drive, it's a World Baseball Classic feature! This week, we're each announcing our picks to win the entire tournament, while making some points against the others' choices.

My choice to be the Champions of the World (Baseball Classic) is Team USA. This year's American squad is plenty different than the 2006 team. With only 2 offensive players on this year's team that played on the 2006 team (Chipper Jones, Derek Jeter), the face of the team is brand new.

Speed on this version of Team USA is much improved also. In 2006, USA only had 2 stolen base attempts and just one of those were successful. In the first round of 2009, stolen bases have not yet come into play for the Americans, but as the tournament moves on, and competition is tougher, speed will be a factor. Jimmy Rollins, Shane Victorino, David Wright, Curtis Granderson and Dustin Pedroia are all stolen base threats, not to mention solid overall base runners who could make considerable differences in ball games simply by taking an extra base.

The infield depth on Team USA is also a force that will be difficult for opponents to overcome. Names like Chipper Jones, Dustin Pedroia, Jimmy Rollins and Derek Jeter kind of go hand in hand with the term MVP.

Sluggers Ryan Braun, Kevin Youkilis and Adam Dunn will power the runs home and continue to wreck opposing pitchers. Youk and Dunn, so far in 2 games, are a combined 6-for-12 with 4 homeruns and 6 walks.

Of course, the pitching is another strength for Team USA. While Jake Peavy and Roy Oswalt, the team's top two starters, have been touched for runs in the first round, the bullpen has really held it down and allowed the Americans to take and hold onto leads. Heath Bell, Jonathan Broxton, Scot Shields, Brad Ziegler, LaTroy Hawkins and JJ Putz form a solid batch of top tier set up men who will be good for an inning or two any time they are called upon.

Rolf at The IronPig Pen has selected Team Japan to repeat as the WBC champion. Japan's strong point is likely their pitching. However, Team Japan, with their 1-0 loss to Team Korea today, fully displayed their own inconsistancies. Japan could not even muster a lone run against a team they had just pounded 14-2, two days prior. Without an ability to cash in when it counts, Team Japan will have a tough time when facing the Pool B winner in the second round. As the runner up of Pool A, Japan faces the Pool B winner. Simply put, with momentum in mind, it's probably easier being the winner facing the team who just lost, than it is being the loser of the "top seed game" facing a team who just won. One additional reason I think Japan's road to a repeat is blocked is because Korea, who will be in the same 2nd round bracket as Japan, has a history of success over Japan. South Korea beat Japan twice in the Beijing Olympics en route to the gold, and beat them twice in the 2006 WBC.

Swing and a Long Drive's Amanda has chosen Team Cuba to be the 2009 WBC champ. It seems as though my cohorts prefer the teams who were in the Inaugural WBC final. Cuba is surely determined to avenge their 2006 loss to Japan. ESPN's USA color analyst Rick Sutcliffe is impressed with Los Cubanos, even though he doesn't know their names. Cuba definitely has power, hitting 6 homers in their opening round victory over South Africa. My simple reasoning that Cuba won't win it all this year is because they'd be part of Pool 1 in the second round, which will feature both Japan and Korea. The Asian teams are built better, top to bottom, than teams Cuba will face in the opening round.


Did my arguments negate one another? (Cuba's gotta face the Pool A Asian teams...Japan has to face the winner from Cuba's pool) Perhaps, just a little. But who cares? Their picks are bad, and my choice is good. In the end, any of those teams will have to beat Team USA, and that won't happen. Smoke on that, baby.

Amanda said…
Nice posts. I'm hoping USA wins, but I don't know if they'd be able to get past Japan or Cuba.