By Jay Floyd March 26, 2009
Total Non-stop Action (TNA) Wrestling is holding its monthly pay per view program at the Liacouras Center on April 19th. A few weeks back, wrestling champ "Big Sexy" Kevin Nash visited the Phillies in Clearwater and TNA shot some footage of Nash chatting it up with our Phillies. Former World Wrestling Champ Nash seemed interested in recruiting some of the World Baseball Champs for appearances at the April Lockdown show.

Brett Myers, Geoff Jenkins, Shane Victorino, Ryan Howard and even the skipper Charlie Manuel are all seen spending time with Nash. Myers even takes time to tell Nash about the Philadelphia phans and what to expect from the crowd.

In an additional note tying the Phillies and TNA Wrestling, Mrs. Hamels' Survivor and Playboy friend, Jenna Morasca is now employed by TNA in a yet to be announced on-air role. Survivor phans may recall Cole's wife, Heidi and Jenna removed their clothing for food, on the show, and then were featured in a Playboy pictorial later that year. 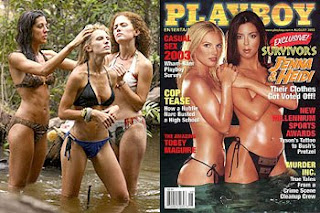 Some of you may also recall Jimmy Rollins appearing on a WWE Raw episode back in December from Rollins' off season home, the Wachovia Center.