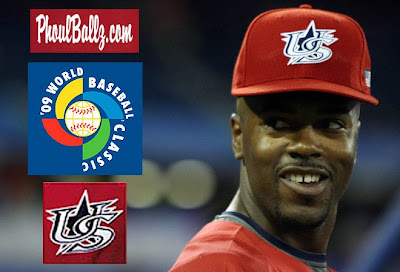 As injuries set in, Team USA has its sites set on redeeming themselves for the mercy rule loss suffered at the hands of Puerto Rico on Saturday night. PR then lost their next match up on Monday, when they got shut out by Venezuela, 2-0.

The injury bug is spreading throughout the Team USA club house. Chipper Jones is out of the tournament. Dustin Pedroia is out, and was replaced by Brian Roberts. Outfielder Ryan Braun and pitcher Matt Lindstrom are also suffering ailments right now. Tournament rules prohibit USA from replacing Jones, Braun and Lindstrom till the current round is complete. Things got so bad during Sunday's game that catcher Brian McCann played left field in the 9th inning.

Team USA manager Davey Johnson has suggested a rule change for the WBC that would allow managers to reinsert a player into a game, should an injury occur. Such a change could not take effect until future WBC tournaments. He would also like to see more exhibition games prior to the tournament, to help prevent injuries.

Johnson says he is to the point where he'd forfeit a game, rather than but a player at risk of further injury. Kevin Youkilis was used as an example. Johnson stated he'd never be able to return to Boston if Youk was injured playing catcher, if needed there, during the WBC.

USA won their elimination game on Sunday against the Netherlands. Jimmy Rollins led the offense with a homer, a triple and 4 RBI. Roy Oswalt threw 4 shut out innings for the win.

Ted Lilly is expected to get the start for Team USA tonight in their attempt to redeem themselves for the 11-1 bashing that PR gave them over the weekend. Hot bat warning...Carlos Delgado (1.496), Carlos Beltran (1.369) and Ivan Rodriguez (1.550) each have a huge OPS through five games of the WBC. Beltran and I-Rod each had 3 hits against USA on Saturday. In regular season MLB games, however, Delgado, Beltran and Ivan Rodriguez only have a combined .233 batting average against Lilly (the gang is 10-for-43, with only 3 solo homers against him and no other RBI).

***
UPDATES:
The Tampa Tribune reports today that if Team USA wins tonight and advances to the semi-finals, Rays third baseman Evan (Philadelphia knows him as EVA) Longoria would likely replace Chipper Jones on the roster.

And adding to The Colbert Report, with a sigh of relief from the entire Phillies Universe...NO STRUCTURAL DAMAGE. Luck o' the Irish? Maybe. Hamels will begin a throwing program on Thursday, and he will let the Phillies know what his pace is. Colbert may not be ready by opening day, but if that is beneficial to the player and the team in the long run, there's really nothing to complain about. If you recall, Brad Lidge wasn't ready by opening day last year, and look how his season turned out.

Now go have a green beer and enjoy your day.