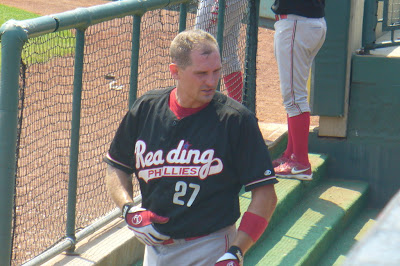 Chris Coste can rest a little easier now that the Phillies have traded away Coste's prime competition for the back up catcher spot. Ronny Paulino was traded twice last night. First, by the Phillies to the Giants for lefty reliever Jack Taschner. Later, the Giants traded Paulino to the Marlins for Hector Correa.

Coste told reporters this morning that he is a little relieved, after learning of Paulino's departure. However, he won't feel like his job is guaranteed, and acknowledged a "constant fight to survive" in order to keep his job.

It is likely also, that this trade clears an easier path for prospect Lou Marson to climb above both Coste and starter Carlos Ruiz, during the season.

Links for you to enjoy...

IronPigPen has content worth reading, as always, today, reviewing IronPigs and R-Phils points of interest.

More Hardball is weak on promises, but strong on the World Series of Hotness. Voters really dropped the ball on this contest, as evidenced over at With Leather yesterday.

And the best news I've heard all week is quoted below, as reported by Larry Shenk on the Phillies Insider Blog:

New carpeting has been installed in the Phillies clubhouse at Citizens Bank
Park. Too much champagne last fall.