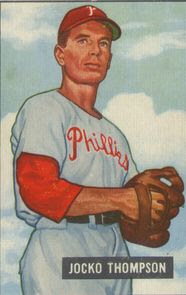 John S. "Jocko" Thompson was a left handed pitcher for the Phillies from 1948-1951. Jocko had been in the Red Sox organization prior to World War 2 breaking out, but served military duty as a paratrooper and company commander prior to making his major league debut.

Jocko was set to enter the 1942 season with the class A Scranton Red Sox but, when World War 2 broke out, he was called to duty and sent to basic training. After completing training in Louisiana, he became a paratrooper with the famed 504th Paratroop Regiment of the elite 82nd Airborne Division.

Thompson and the 82nd Airborne made jumps in nearly every major war zone. One of Jocko's early jumps was into Sicily in 1943. This invasion led to the Allies' capture of dictator Benito Mussolini. The list of Jocko's notable war experiences is long. When the war ended, so did Thompson's military career.

Upon his return to the United States and baseball, Thompson was the most decorated professional ball player. He served in North Africa and Europe and, while there, was awarded two purple hearts, a Silver and a Bronze Star, seven battle stars and numerous other ribbons, citations and awards along with a battlefield commission during his heroic career at war. In spring 1946, the 29-year-old reported to Scranton.

Herb Pennock, a former director of the Red Sox minor league system, was now the general manager of our Phillies. Pennock recruited members of his Boston staff to fill spots in the Phillies organization. One of his key hires was Scranton's business manager Joe Reardon, as the Phillies minor league director. Pennock and Reardon were familiar with Thompson and his history of heavy combat and the men made up their minds to acquire Thompson. They knew Jocko was a fighter and had heart. Prior to the 1947 season, Thompson's contract was purchased from the Red Sox.

Jocko would spend parts of the coming seasons with both the triple A Toronto Maple Leafs and the Phillies. Thompson, over his 4 ML seasons, appeared in 41 games, with a 6-8 record, 1 save, and a 4.24 ERA. Some say that the war took far too much out of him to have a sparkling pitching career, but his military service was far more important that what he did on the baseball diamond.