It's a Q&A with John Flynn! 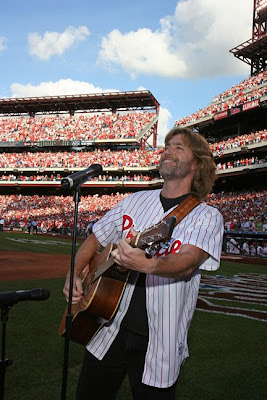 PhoulBallz.com was lucky to have folk music artist John Flynn take a few moments to answer some questions about baseball, his national anthem performances at Phillies games and his career. You can see John live in person in Wilmington, Delaware this coming Saturday at YoYo Joe's Toys and Fun.

-John, you're a Philadelphia area native and a Temple graduate. What is it like to perform in your home town?

Its always the best! The more I travel around the country, the more convinced I am that I was lucky to be raised around here...

- You've been seen around the area at live shows wearing Phillies gear, and of course at multiple Phillies games performing the National Anthem. Where do baseball and the Phillies rank with you?

As someone that grew up in Delaware County in the seventies, the Phillies were always on my radar. But I didn't really become a baseball fan until I became a musician. Driving home from gigs late at night I would pick up Phillies games from the west coast... so you see it was Harry, Whitey and Wheels who lured me in! I travel alone a lot but their voices always made me a little less lonesome out on the road. Because of the strength of our AM station, you could pick up Phillies games way out in Chicago!


- In Clearwater this spring, when the Phils faced Toronto, you performed both anthems...a portion of your Canadian anthem was in French. Difficult to learn, or were you already down with the French?

I had high school French, which means I don't speak any at all! I learned to sing the anthem phoenetically but I've had it translated for me so I kind of do know what I'm singing.


- Can I get you to tell our readers the perks of an Anthem performer?

My kids would say VIP parking! They think that's pretty cool. I still get a kick out of hanging around on the field before the game... and of course high-fiving the Phanatic! You know, after all these years it never fails to give me chills to sing the Star Spangled Banner... to see the faces of the folks in the crowd... you really understand what the song means in times like these when you finish singing and that roar goes up from the crowd!

- Growing up, who were your favorite baseball players? And now?

The names that jump to mind from my baseball card days are Johnny Callison and Dick Allen. (Mr. Allen is still a favorite... he had some words of wisdom for me the time I got booed at the Vet while doing "Take Me Out to the Ballgame". I wrote all about it in a song called "Hey Vicente". The title refers to Vicente Padilla who gave up a grand slam to Edgar Renteria just before the seventh inning stretch...) As I settle into deep middle-age, I love to watch Jamie Moyer pitch... also love to see Chase and Jimmy play the infield! And of course you never know what will happen when Ryan Howard steps in! It's a great time to be a Phillies fan!

- Are there any John Flynn athletic tales from your youth to share? Or was it always about the music?

Nothing to speak of... I played lacrosse in high school. Now, I'm a pretty avid distance runner. Last year I did the Boston Marathon with my 20 year-old daughter Sarah!

- What could Phillies phans expect from a John Flynn show?

My shows range- depending on the audience- from family and children's music, to songs that speak about the stuff we read in the newspapers every day.

- You've passed down music to your children. Did you pass down the Philadelphia sports phandom also?

I'm not sure yet... My 17 year-old son Cole watches the Phils on the tube with me during the regular season, but the others kind of wait for the playoffs to get interested.

- You sing a great holiday tune about the wonders of mixing booze and fire arms called, "Christmas Balls". Is there any chance I could get you to do a spring time remix called Phoul Ballz (dot com)?

I'll have to think about that! Ha ha.

Alright, thanks a bunch. John will be performing all spring and summer long all over the country. Check out John's myspace page at http://www.myspace.com/johnflynnfolksinger for tour dates, or check out http://www.johnflynn.net/for more information on his music.