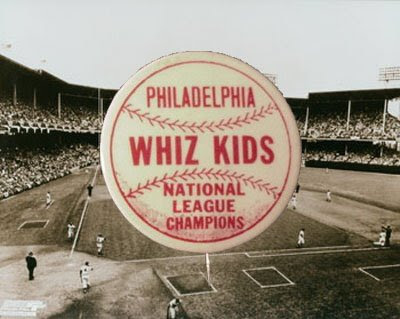 There is tons of lore about the 1950 Phillies, the team full of youth that fought off the Dodgers to make it to the World Series, but do you know about how the season finished? Do you know how the 1950 Whiz Kids nearly pulled a 2007 Metropolitans? Read on, little stars...and let's shine together.

In the closing weeks of the 1950 season, our Phillies had a 7 game lead with just 11 games left to play. A World Series berth seemed almost locked up. It would be the Phillies first trip to the Series in 35 years. However, without warning, the team began to fizzle (yes the Whiz began to Fizz). They lost seven of nine, during the final weeks of the season, while the Brooklyn Dodgers won 12 of 15 games during a stretch in the closing weeks. The Phillies roster suffered a big loss, in September, when 17 game winner, pitcher Curt Simmons, an Army National Guard member, was drafted for the Korean War. The team kept fighting, however. In fact, 1950 was the year that the team got the nickname, "The Fightin' Phils".

With a collapse looming, Brooklyn hosted a 2 game series to close the season against the Phillies, at Ebbets Field. The Phils held a 2 game lead. If the Dodgers won both games, it would force a 3 game playoff series to decide the National League Champions. As you may expect, for the sake of building drama so future generations like us can pass the story on, the Dodgers were victorious in the 1st game. Roy Campanella, a Philadelphia native, smashed a 3-run homerun to seal the 7-3 victory for the Dodgers.

On Sunday, October 1st, Robin Roberts would take the mound for Philadelphia. This would be Robin's third start in five days. Righty Don Newcombe would start for Brooklyn. This was a match up of 19 game winners. Former Phils manager Burt Shotton was now the manager of the Dodgers.

In the top of the 6th inning, Willie Jones singled home Dick Sisler for the first run of the game. In the bottom half of the 6th, the Dodgers tied it on a Pee Wee Reese homer.

The score was still tied entering the bottom of the 9th inning. The Dodgers had runners on 1st and 2nd, with no outs, when Duke Snider lined a single to centerfield. Richie Ashburn fielded the ball on one hop, while Dodgers third base coach, and former Phillie, Milt Stock waived Cal Abrams home. Abrams was not the fastest guy on the field (12 steals in 8 seasons), and was surely no match for Ashburn's arm. Richie fired home and Abrams was out by several feet, tagged by Stan Lopata. Ashburn's throw prevented the pennant winning run from scoring, and kept the Phillies alive. Roberts then intentionally walked Jackie Robinson, and escaped the bases loaded jam by getting Carl Furillo and Gil Hodges to pop and fly out, respectively.

The game then went into extra innings with both Roberts and Newcombe still pitching for their teams. Dick Sisler would smash a 3-run homer to cement his name in Phillies lore. The Dodgers did not score in the 10th and the Whiz Kids avoided a terrible collapse and were on their way to the World Series, with a 4-1 victory.

IRONPIGPEN said…
This was great. I did not know the origin of that name.

I was history major in college so I appreciate the lesson.

I also lived in Philly for a few years so I appreciate the Campanella thing.

I'll do an all-time draft thing. What are we doing? Picking a player for each position or a 25-man team. Eligible players are "drafted and signed" by Phillies? Selection criteria based on Phillies MLB career or complete MLB career?
March 24, 2009 at 10:13 PM