Down on the Farm Freebies

By Jay Floyd March 02, 2009
This coming season, the farm teams have some worthwhile giveaways and promotions. Here is a glance of some of the best events, by team. 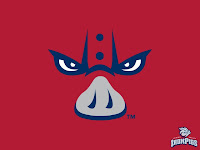