By Jay Floyd March 18, 2009
Team USA won their elimination game last night in dramatic fashion to advance into the semi-final round of the World Baseball Classic. With injuries still plaguing the Americans, expect Davey Johnson to manage the next game conservatively, like he did in the opening round. That next game in the 2nd round, tonight, will finalize the seeds in the semi-finals. Seeding doesn't matter to Johnson, advancing does.

Phillies phans who stayed tuned for the walk-off win got to see Shane Victorino and Jimmy Rollins spark a 9th inning rally against Puerto Rico's JC Romero. While David Wright smashing a game winning hit against Romero (video here) is not something I ever thought I'd want to see, I think when the game is played in March, and there is national pride at stake, I'll be inclined to cheer that occurance. 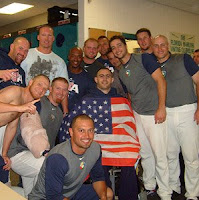 As if the walk off win wasn't a remarkable enough story, a Dolphins Stadium security officer should be praised for his quick role in making the night very special for one wheelchair-bound American military veteran from New Jersey. Jeff Passan, of Yahoo.com, reports on Sgt. Felix Perez's amazing night. Perez brought an American flag to the game last night...a flag that had been everywhere with him including the deserts of Afghanistan, while he was assigned there on military service.


On the way out, the 27-year-old Perez placed the flag in his lap and leaned
over to a security guard manning Gate G. He was hoping some players from Team
USA might sign it. The security guard led Perez and his sister to the U.S.
clubhouse, and the flag went inside.

“The next thing I know,” Perez said, “I’m getting called to come back
in there.”

And so began the coolest 30 minutes of Felix Perez’s life. On an
evening when he felt especially proud to be an American – when a group of his
sporting heroes wearing his country’s name across their chests banded together
to win a game they had no business winning – Perez found himself surrounded by
them, doused with celebratory Miller Lites, with the American flag that was with
him during the worst moment of his life passed around the room and signed by
every player on the team.

Check out the link above, to read the full story.