The Neighbors are Talkin' 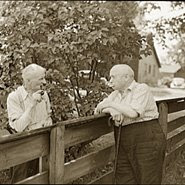 My Blogosphere neighbors are always chatting it up, even when I come up short of an original post, on a given day. Here's a trip around the horn and what some other cool blogger types, that I am familiar with, have going on today.

It's the story of the day, ladies and gentlemen. It's one of those chunks of news you just can't avoid. Philly Burbs, The Fightins, The Big Lead, With Leather, and others, all had the report on the latest Burrell Girl, Sophia Rossi. Rossi, a "friend" and coworker of adult film icon Jenna Jameson, was on The Howard Stern Show this morning, discussing her celebrity repertoire. From Stern's web site...

Sophia Rossi said she dated MLB slugger Pat Burrell "He was
immature...he was young at the time."

The men at Not Qualified to Comment have a great video up with Stern Show comic Artie Lange telling stories about Bob Eucker and Harry Carey.

Sharapova's Thigh has the clip of Matt Vasgersian dropping the biggest curse of them all on live MLB Network programming. Everybody wants to be like Chase.

Mike Ashmore looks forward to New Jersey Kings football in Trenton (March 2010)! Yes. indoor/arena football. I had no idea either...

And lastly, the other day, Chris at Long Drive: A Phillies Blog explained how he began blogging. It includes a cool tip of the ballcap to the WSBGM guys.

Jay Floyd said…
Seems as though BallHype.com is linking to the Phoul Ballz page.