By Jay Floyd January 03, 2013
Today at PhilliesNation.com, the staff there pitched in for a roundtable entry, proclaiming their bold Phillies predictions for 2013.  My standout thought on what's to come next season was not specifically about the Phillies, so it was not included in the post by the prevailing site editor, but it's still related to the team, if you ask me.

Check out my bold prediction for the coming season and then click the link below, to see what Brian, Corey, Ian and the gang had to say about what they expect from the likes of Charlie Manuel, Carlos Ruiz, Ben Revere and others in 2013. 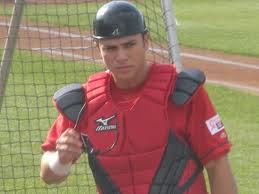 Prediction not specifically for the Phils, but related- Former Phillies first round draft pick Travis d'Arnaud, acquired from Toronto in the R.A. Dickey trade, claims the starting catcher job for the Metropolitans by June and is named National League Rookie of the Year in November.  d'Arnaud has posted a .320 batting average while slugging 37 HR in 181 games the past two years, combined at Double-A New Hampshire and Triple-A Las Vegas.