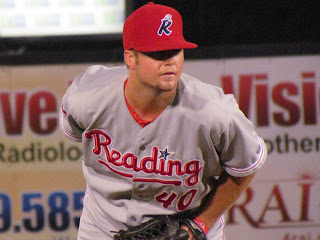 Right-hander Tyler Knigge (pronounced kuh-NIG-ee) proved himself to be a fast rising pitching prospect last year, as he dominated with the Class A Advanced Clearwater Threshers and later earned a promotion to Double-A Reading.

Drafted in the 12th round of the 2010 draft out of Lewis-Clark State College, Knigge made his pro debut that year, pitching with the Gulf Coast League Phillies and the short-season Class A Williamsport Crosscutters, sporting a 0-4 record along with a 5.28 ERA in 11 outings (four starts). He would pitch in the Florida Instructional League that year as well. The following season, Knigge was a strong performer with Class A Lakewood, pitching exclusively out of the bullpen, where he looked tougher on opposing batters, tallying a 4-3 record, four saves and a 3.32 ERA.

In an effort to increase his own stamina, Knigge lost approximately 15 pounds over the 2011-2012 off-season. With improved conditioning, Knigge was amazing with Clearwater last year, posting a 0.60 ERA along with a 4-1 record and nine saves in 34 relief outings, and was recognized as a Florida State League All-Star.

In early July, the 6-foot-3-inch 225-pounder was promoted to Reading and would post strong numbers there as well, with no decisions, two saves and a 2.92 ERA in 21 appearances. If not for an oddity of an outing on July 20 in Trenton, in which he was charged with three earned runs without recording an out, Knigge’s ERA at the Double-A level would have been 1.82.

Knigge spent time this autumn in the Arizona Fall League, where he struggled a bit, posting a 7.50 ERA through 10 outings for Peoria.  The troublesome numbers weren't disappointed to a mentally sturdy Knigge, who took many lessons out of his time there against some top notch competition.

The 23-year-old possesses a repertoire that includes a plus fastball with some movement that generally ranges 94-96 MPH, but can clock higher, a solid change up as well as a quickly developing slider that his coaches have confidence in.  Knigge dropped his knuckle curve offering in favor of the slider heading into last year.

The area where Knigge needs the most improvement, as he admits himself, is throwing his slider with more confidence, in fastball counts, and keeping the opposition off balance. The Idaho native, who was coached by his father, Kent, during his formative years, credits his dad, who was also a pitcher at Lewis-Clark, with helping him learn the game.  Kent, an American Legion coach, continues to help Tyler with his mechanics to this day, providing physical and mental advice, whenever he sees fit.

Look for Tyler to begin the season in the back end of Reading's bullpen, likely as the club's closer.  With his tools and exceptional focus on improving all aspects of his game, it may not be long, before Knigge is mentioned among the crop of home grown relievers like Antonio Bastardo, Mike Stutes and Justin De Fratus, that the big league Phillies are expected to depend on going forward.

Anonymous said…
no one else really ranking this guy. why are people sleeping on him? i think he should see some spring training action this year, so we can get good a look at him.
January 30, 2013 at 6:32 PM