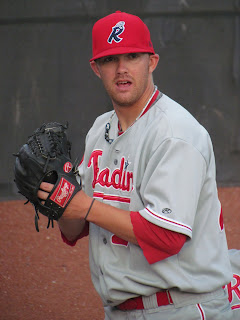 Tyler Cloyd dominated in the minors last season thanks to a refined repertoire and top-level command. Running through Eastern League and International League competition, Cloyd reached the big leagues by season's end and is in a position to potentially help the big club in the coming season.

An 18th round draft selection in 2008, Cloyd began his pro career that  year, posting a 7-4 record with a 3.91 ERA in 14 outings combined with  the rookie level Gulf Coast League Phillies and short-season Class A Williamsport. Since then, the 6-foot-3-inch  210-pounder has had winning records every season, while alternating  between starting and relief duties.

Whether it’s as a starter or  pitching out of the bullpen, Cloyd has become comfortable taking the  mound in any role, as evidenced by his 2011 output.  Cloyd would go on  to appear in 31 games (22 starts) for Clearwater and Reading that year, collecting a 9-4 record, a 2.77 ERA and an 8.51 K/9 mark, which  proved to be a career best.  Following the season, Cloyd pitched in the  Arizona Fall League but wasn’t as sharp in a starting role there, 4 record with a 4.35 ERA.

In his finest season as a  professional last year, Cloyd posted a 15-1 record while notching career  bests in ERA at 2.26 and batting average against with a .214 mark in 26  combined starts at Reading and Triple-A Lehigh Valley.  Although many of his other stats were at a professional peak, his K/9  mark fell to 6.09 during last year’s minor league campaign.

Late in August, the Nebraska native joined the big league Phillies’ starting rotation, filling in for an  ailing Cole Hamels . In five starts in the Majors, Cloyd tallied a 2-2 record along with a 4.91 ERA.  He ended the season sidelined with arm fatigue.

Cloyd’s ability to throw strikes has  been his strength, throughout his career.  While his upper-80’s  fastball isn’t among the most acclaimed in the organization, his command is  tough to beat.  Additionally, the 25-year-old has added a cutter and improved his curveball while eliminating the slider from his offerings.

Fairly reliant on his routine and  some superstitions, Cloyd keeps his production up by sticking to things  that have become habitual. His night-before-a-start massage and his  lucky underwear keep his body as well as the mental side of his game on point.  Also, Cloyd says he requires chewing gum  while he’s on the mound to avoid headaches.

A young minor league veteran, Cloyd  knows that he can command every aspect of his game and he is capable of  dictating the pace of a contest, no matter what the scenario may be.  The coming season should provide Cloyd, in one role or another, with an opportunity to, again, see how well his abilities translate at the big league level.