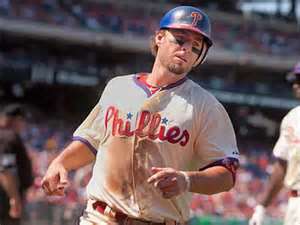 Infielder Kevin Frandsen proved to be one of the most pleasant surprises for the Phillies in 2012.  In a season that saw the infield struggle with injuries, the team called up the California native to fill a void at third base and he proved to be a worthy addition.  Frandsen, who was an International League All-Star last year for Triple-A Lehigh Valley, joined the Phillies in late July and proceed to notch a .338 average with two homers and 14 RBI in 55 contests.

The 30-year-old Frandsen, who is a .267 career big league hitter, is slated to be the key reserve for a Phils infield that projects to be at full health headed into the 2013 season.

Last week, I spoke with Kevin about his success with the Phillies, his two managers from last season, his unique foundation and more.  Read ahead to check out the full interview.


-Kevin, you had a lot of success last year at the Triple-A level and in the majors.  I just wanted to get some thoughts from you on what you would attribute the great output last year.

Just playing.  I've always done well in the minor leagues, 'cause I played every day and I finally got an opportunity to play every day in the big leagues and it's taken six, seven years up there, you know, fighting and doing stuff to finally get that opportunity and, you know, that's all it is.  You ask a basketball player how they're gonna get a chance to shine and it's to get minutes.  It's the same thing, just getting innings in there and at bats and, hopefully, things go right and they did.  I felt like- I've always asked if I could sink or swim up there and I felt like I swam.  Hopefully, that will continue and I'll help out the team this year and, obviously, the main goal is to get hardware and winning championships here is the number one goal.


- You got to play for Ryne Sandberg last year with Lehigh Valley and he's going to take a step upward to be on the Phillies coaching staff this year.  Some guys might feel an individual like him could have more impact on players because of the things he has done, the legacy he has built.  Do you agree with something like that, where a guy like him will have more impact on young players?

Yes and no.  The thing that's gonna get by with him more than anything is how awesome he is, personally.  He's so humble.  You're not going to find a Hall of Famer with more credentials than him and not talk about himself.  That alone makes you want to listen.  When he speaks, it's never about himself.  It's about how you can make your game better.  Not about, "Oh, well I did this..."- No!  He's never about that.  He's about making you a better player, (getting) you to respect the game more, by playing harder, by preparing yourself so you're never going to be in a wrong spot.  I think it's only going to help, having the experience with the coaching staff that we do have already, this just adds a little bit more.  I'm excited because I got to play for him for two year and we got really close and I know what type of man he is and I feel like having a good person in the dugout and a good leader to add to what we have here is only going to be key to making big things happen.


- You mentioned that ultimate goal of obtaining some hardware and clearly that would all start in spring training.  When do you expect to head down to Clearwater and do you have anything in mind as far as goals in spring training go?

I don't set goals.  I just want to get out there and do what I normally do and that's play hard.  You get the rust off the first week, or so.  I'm going to get down there on February 9th.  I always get down early, 'cause I like getting situated.  There's no reason to be rushed.  I miss being in the clubhouse, ultimately, and it's nice to get down there early and get into all that.


- You eluded to being a pro veteran with time spent at various levels.  What would you consider among some of your career highlights?

Number one is being in "756", playing shortstop for when Bonds hit (the record breaking home run).  Jonathan Sanchez had a no-hitter and I was playing second base that night.  (Those were) two incredible moments.  And I think last year I made a play against the Reds, it was a play at home and I got a standing ovation, and it was one of the first "standing o's" I had for a play, or anything like that.  You're not looking for those things as a player, but when it happens, it hits you hard and you just want to play even harder.  Not to get more of those, but because you know people appreciate you, and to show that you appreciate them by playing harder.


- We talked about Ryne, but Charlie Manuel is, of course, another manager with a big time reputation that surrounds him.  What are your thoughts on Charlie and maybe how he compares to some other guys that have managed you?

Good man.  And he's upfront with you right away.  He's not trying to lie to you and tell you things and then go the opposite way.  You know what you're getting out of him and I think as a player, as a man, it doesn't matter what your job is, you want to know what your role is and he defined it for me.  And he defined it by remembering that I love college basketball in spring training and when I got called up, that's all we talked about for a day and a half.  It means a lot to me that he remembers that, because I know it was in February when we first talked about it, so when he brings it up in July, it means that much more.  So, I think you know what type of human being he is and, for me, that goes farther than what you are as a manager and what-not, because I think being a good person will lead you to being a good manager.  At some point, you're going to have people following you because you're a leader and that's number one.


- So, you mentioned ideal qualities in a coach meaning a lot to you and I know something else that means a lot to you is your foundation and it's relation to your brother.  Talk about that a bit.

19 For Life, we started eight years ago, just after my brother, DJ, passed away and it's a foundation that we started to keep his legacy alive, which was never complain, never worrying about himself.  It was always about others, and, so, we have a couple events that draw some money for us, so we can spread it around to kids that have battled adversity and to continue to succeed in sports.  It's just a way of giving to the children's hospital up in Stanford, in Palo Alto, where he was pretty much all 19 years of him battling cancer.  So, 19 For Life stands for a lot of stuff.  He was born on May 19th, he battled cancer for 19 years, his favorite number was 19, his favorite player was Dave Righetti, who wore 19 and my first number in pro ball was 19.  And it means a lot that a lot of people are starting to ask more and more about it because I love talking about my brother.  I love talking about what he stood for in his 25 years of living.  His 25 years of living was more living than most 80-year-olds.  He lived it completely full and it's just fun to be able to pass that along.

LHP Brown speaks on recent release and his future

June 05, 2020
Aaron Brown, image- Jay Floyd Please consider supporting my work and subscribe to  my Patreon page .  Your patronage will get you exclusive interviews and other prospect related material as well as early access to all of my other content such as this post.  Thank you. Aaron Brown was released last Friday after nearly six years in the Phillies organization. Brown, the Phils' 3rd round draft selection in 2014 out of Pepperdine, was primarily an outfielder after turning pro.  A two-way player in college, Brown switched to pitching in 2017 after struggling on offense (.224/.313/.360) at the Double-A level. A dominant hurler in college, Brown posted a 13-1 record along with a 1.95 ERA in 17 starts in 2014.  A solid performer on the minor league mound as well, the California native notched a 5-4 record with a pair of saves, a 3.82 ERA along with an 11.0 K/9 mark in 45 relief appearances for the Double-A Reading Fightin Phils last season. With free agency on the horizo
Post a Comment
Read more

June 12, 2020
Dylan Cozens, image- Jay Floyd Please consider supporting my work and subscribe to  my Patreon page .  Your patronage will get you exclusive interviews and other prospect related material as well as early access to all of my other content such as this post.  Thank you. Last week, as he rang in his 26th birthday, Dylan Cozens wasn't celebrating.  Instead, he took to the streets in the midst of rioting to protect local businesses in his native Scottsdale, AZ. After 1:00 AM, Cozens, a former Phillies outfield prospect and current Rays minor leaguer, caught a glimpse of some rowdy happening on Facebook Live.  Posts showed violence and thievery and the former second round draft selection wasn't going to let it continue.  "When I saw what they were doing and the reason behind it, I decided to try and stop it because it wasn't right. It had nothing to do with Black Lives Matter.  It was a hate crime to go and try to destroy businesses and loot and hurt peopl
Post a Comment
Read more