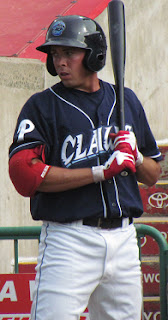 Kelly Dugan was the Phillies' top draft pick (2nd round, 75th overall) back in 2009.  Since then, it's been a bit of a slow progression in the pro ranks, but after a solid season with Class A Lakewood in 2012, the California native has shown that he is ready to make an impact in the organization.

Much hype surrounded Kelly upon being drafted to the Phillies, as an image of him on the set of his director father Dennis Dugan's film Grown Ups, with many of Hollywood's comedy elite, made the rounds.  Through his career, though, Dugan has dealt with a collection of injury concerns that have prevented the 6-foot-3-inch 195-pounder from fully establishing himself as a potential rising star.

After signing his first professional contract, Dugan, who was working on being a switch-hitter at the time, debuted with the Gulf Coast League Phillies, posting a .233 average with eight doubles, a triple and eight RBI in 45 games.   The following year, with the GCL team and short-season Class A Williamsport, Dugan batted .366 with a homer and eight RBI in 28 combined games.  He missed roughly two months of action that year after he was hit in the leg with a batted ball during batting practice in June and later developed a staph infection that required draining.

Dugan returned to Williamsport in 2011 and represented the club in the New York-Penn League All-Star Game.  With the Crosscutters, in 47 games, he sported a .284 batting average along with two home runs and 21 RBI.

Last season with Lakewood, Dugan displayed improved power and steady production, as he notched a .300 batting average, 12 homers and 60 RBI in 117 games.  Additionally, his OPS, at .857, was .127 points higher than his mark from the previous season.

A refined approach at the plate was a big reason for improved offense and it was all Dugan's own doing. As he dealt with the struggles involved with developing an ability to switch-hit, Dugan chose to discontinue his efforts from the right side, wanting to focus solely on being a lefty batter.  Dugan felt as though his ability to hit left-handed pitching would improve quickly from his natural side, if he gave it a chance, and he was pleased with the results, as his splits (.305/.386/.496 vs righties, .291/.390/.419 vs. lefties) were fairly balanced.

Overall, Dugan is a consistent and confident hitter.  He showed abilities to drive the ball well and hit the other way during his breakout season in Lakewood.  In order to ensure further improvements, Dugan spent time this off-season privately working on his hitting with seven-time big league All-Star Reggie Smith.

In 2012, concerns with Dugan's hamstring during preseason and then an ankle sprain in April had the youngster resigned to manning first base for the BlueClaws.  Once he was fully healthy, however, Dugan moved back to the outfield, where he feels more comfortable.

The 22-year-old displays average speed on the bases, but has a strong ability to read balls off the bat and get solid jumps on fly balls while on defense in the outfield.

Dugan is now back to where he and the Phillies feel he belongs, among a group of prospects that are on the rise and worthy of being talked about in the future plans of the big league club.  In the coming season, expect Dugan to take a step upward and man the outfield for the Class A Advanced Clearwater Threshers.