We’re just under a month until pitchers and catcher are due to report to Clearwater for spring training. That means it’s time to kick off our annual countdown of the top 25 prospects in the Phillies organization. Gradually, in the coming weeks, leading to the kickoff of the 2013 regular season, I will be unveiling player reviews for each of the top developmental talent that you, as Phillies fans, should be familiar with.

Taken into consideration when reviewing these young talents will be age, minor league performance relative to levels played, value to the organization as well as future potential.

These rankings will not include players over 25-years-old or individuals that have spents lengthy and multiple stretches in the big leagues. Thus, players such as Austin Hyatt, Darin Ruf, Justin De Fratus, Phillippe Aumont and Jake Diekman will not appear on this year’s list.

Some very talented youngsters did not make the cut simply because other individuals ranked higher. Included in the group that fell short of making this year’s top 25 list are outfielders Leandro Castro and Jiwan James as well as righty pitchers Colby Shreve, David Buchanan and Gabriel Arias.

Additionally, 2012 draft picks Mitch Gueller and Dylan Cozens weren’t far off the list either and, with their exceptional talents that earned them each a considerable signing bonus from the Phillies, could very well find themselves on this list next year. 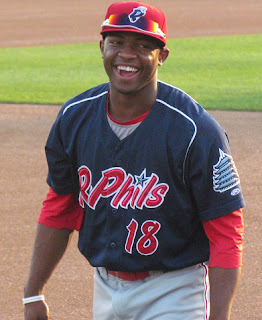 Castro, 23, is one of the most enjoyable players in the Phils' system to watch on the field and is likely the first alternate to this year's list.  As an Eastern League All-Star with Double-A Reading last year, Castro posted a .287 average with 10 homers, 71 RBI and 13 steals in 133 games.  Castro worked during the 2012 season to improve his approach at the plate and, according to Reading manager Dusty Wathan, he became a smarter player last year as well.  The righty hitting Dominican certainly has the tools to continue to develop and play at higher levels, but with a bat that generally appears to be on the verge of displaying considerable power, consistency must be key for Castro to reach the bigs.

James dealt with a troubling left knee issue all throughout the 2012 season, which resulted in a drop in offensive output and speed numbers from the 23-year-old.  He sported a .249 average with 14 doubles, five triples and six HR while stealing just eight bases in 16 attempts last season for Double-A Reading.  The coaches in the Phillies system have long awaited the development of James' physical frame.  Once described by Lakewood hitting coach Greg Legg as "a pillar of consistency", the 6-for-4 180-pounder hasn't put on the muscle that made the same coach declare, "once he gets his man-strength, look out!"  In turn, James' OPS of .651 last season was a career low.  It's hard to tell what the future holds for this athletic defensive wiz, but it's clear the Phillies have long wanted him to add muscle and he hasn't done it. Originally selected in the 23rd round of the 2007 draft as a pitcher, James became an everyday outfielder beginning in 2009, following an arm injury. 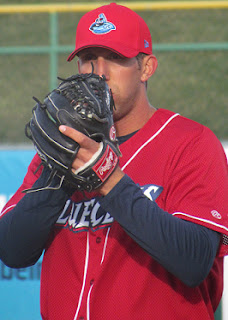 Sporting a 94-95 MPH fastball, a cutter, a change up and a solid curve ball, Shreve is a skilled hurler that can put together some terrific stretches of outings, when he is hot. A victim of numbers last spring, the Nevada native began the 2012 regular season with Class A Lakewood after pitching there in each of the previous two seasons. It wasn’t long before vacancies in the higher levels allowed Shreve to move up to Class A Advanced Clearwater, where he pitched in seven games in 2011. As a member of the Threshers bullpen last season, Shreve tallied a 1-1 record, two saves and a 2.25 ERA while striking out 19 and walking six in 20 relief innings over 13 appearances. By early June, Shreve found himself pitching for Double-A Reading, where he put together a 3-1 record with two saves and a 4.40 ERA in 28 outings. Shreve’s confidence seemed to take a hit, as he walked 25 batters and struck out 29 in 43 innings for the R-Phils. If he had exhibited some better control, the Phils’ 6th round pick from 2008 would have stood a better shot at being ranked on this year’s list. Shreve turned 25-years-old earlier this month and pitched in the Arizona Fall League this off-season.

Buchanan, the Phillies' 7th round draft choice in 2010, missed some considerable time last season, following tendon surgery on the middle finger of his throwing hand. Armed with a fastball that generally ranges from 89-92, a slider and a sinker, Buchanan posted a 3-5 record with a shutout and a 3.86 ERA through 12 starts with Double-A Reading last season. Buchanan's time missed as well as his drop in K/9 (from 6.29 with Lakewood and Clearwater in 2011 to 4.89 last year) were the main contributors to his fall from the list as the Georgia State product ranked #22 last year on this list. Heading into the 2013 season, the 23-year-old expects to be 100% and should return to the Reading rotation in April.

Arias, a native of the Dominican Republic, impressed many with his 95 MPH fastball last year for Class A Lakewood.  With the 'Claws last season, Arias posted a 4-9 record with a 3.66 ERA and a 9.09 K/9 mark.  He wrapped up his 2012 regular season making a start for Clearwater, striking out nine and walking none, but taking a loss in five innings of work.  A candidate to begin the 2013 season with Class-A Advanced Cleawater, Arias' development may rest on the consistency of his slider and his change up. The 23-year-old has a bright future and is very capable of being a strong reliever at higher levels.

As opening day approaches, check back here regularly for the unveiling of the newest list of the top 25 ranked prospects within the Phillies organization and witness the count down, one by one.