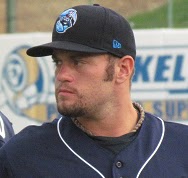 Last season the Phillies selected catcher Josh Ludy as a senior out of Baylor University in the 8th round of the MLB amateur draft.  The 22-year-old righty hitter had a solid debut as a pro.  Serving mainly as a backup, the Indiana native sported a .271 batting average along with 11 doubles, one triple, a homer and 12 RBI in 32 games for the Class A Lakewood BlueClaws. Following the regular season, Ludy was among a group of prospects selected to spend an extra month in the Florida Instructional League.

This week, I spoke with Josh to get his thoughts on his transition from college to the pro's, time spent at instructs, his off-season training regimen and plenty more.  Read ahead to check out the full interview.


- You performed well last season with Lakewood after signing your first professional contract.  How would you assess your first go of it in the professional ranks and was the adjustment from college to the minors what you expected?

I feel the first year for me went well. Obviously, there are a lot of things I would have liked to have improved on, but it's all part of the process. I think one of the biggest adjustments for me was having to get familiar with an entirely different staff of pitchers. Coming from college, where you spend four years with some guys, or, at the least, have a full year to get to know guys, to maybe catching someone one time and they move on, or having a new guy come in towards the end of the season. It took a little while to get comfortable in learning everyone, but towards the end of the year I felt pretty good about it. As far as hitting, it was definitely an adjustment moving to the wood bat again. Where the weight is in the bats, and the smaller sweet spot took some getting used to, but the more time spent with it, the more natural it felt.


- What was the experience of playing in the instructional league like and how is it beneficial to players?  Also, is it a big plus to be able to play there and make an impression on more coaches and front office folks from the organization?

I had a great time at instructs. Getting to do individual work with the coordinators on a daily basis was a great experience. We have a great group of coaches and instructors that are there to make us better and have a lot of insight and wisdom to pass down. Every day was an opportunity to be able to show the organization what you can do.


- Since the season, what has your routine been and are you doing anything differently than other winters?  How much time off from hitting do you take?

Since instructs ended, I've been working out five or six days a week, trying to get prepared for the upcoming season. This winter is a lot different than the past mainly because I'm not in class, and don't have to be at team workouts and practices. At Baylor, our workouts were with the team, and we had to be places at certain times. Now, I can set my own schedule and have more time for other things I enjoy. I took off the end of October and November from hitting and started working back into it around the first of December.


- What facility do you use for off-season training and who do you workout with?

For hitting and throwing, and some conditioning I use the facilities at Baylor, and there is also a local gym I can lift at or do yoga classes. I work out with most of my old teammates from Baylor that are playing pro ball for other teams, as we all seem to come back for the off-seasons.


- When do you expect to head to Florida for spring training and what are your goals for your time there?

I'll probably head down a few days before the report date, that way I can get acquainted with everything again. My goals mainly just include performing like I know I can, controlling the things I can control, and not worrying about the rest. Take advantage of the opportunities and make the most of it.


- I imagine that the college season back-to-back with your months as a pro made for the longest year of baseball you've had as a player.  What's been the best/most enjoyable non-baseball thing you've done this off-season?

Definitely getting to spend more time hunting. My roommate has a ranch about two and a half hours from here that I can go down to on the weekends, since I'm not tied down with school. Just the anticipation of a big buck or boar walking out gets my heart pumping.