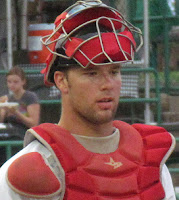 Drafted in the 3rd round of the 2010 draft, catcher Cameron Rupp has steadily been an improving prospect for the Phillies. The 24-year-old has shown an ability to lead a pitching staff and work harder than most to improve his all-around baseball abilites.

Rupp, a Texas native, made his professional debut with the short-season Williamsport Crosscutters in 2010. In 55 games that year after making his pro debut, Rupp posted a .218 batting average with five home runs and 28 RBI against NY-Penn League competition.

Rupp, whose father Kevin pitched in the Montreal organization during his playing days in the 1970's, displayed increased power in 2012 as a member of the Class A Advanced Clearwater Threshers. With career highs in doubles (22), home runs (10) and OPS (.770), which was 50 points higher than his mark the previous year, Rupp proved that his production with the stick can keep up with his efforts behind the dish.  For his strong output, Rupp was honored as a Florida State League All-Star last season.

The mental side of the game is critical for many players, but it's a clear factor for Rupp, to anyone that watches him play regularly.  Confidence is something Rupp relies on a great deal, as he snowballs his success, whenever the 6-foot-2 230-pounder gets hot.

Praised for his work ethic on defense, his strong throwing arm, his solid footwork and especially his ability to lead, Rupp has shown evidence of becoming a complete package on that side of the game.

The University of Texas product, Rupp, faces a chance of beginning the 2013 season with Clearwater once aagain, but that is simply because the organization is currently loaded with catching depth in the minors. With two of last season's Double-A Eastern League All-Stars, Mexico native Sebastian Valle, and former Giants 2nd round draft pick Tommy Joseph in the mix at the upper levels, Rupp could be held down until he or one of the others is traded.

The other two backstop prospects are both younger than Rupp (Valle by 22 months, Joseph by 34 months).  The longer Rupp takes to reach the upper levels of the minor leagues, the more hindered his progress may become.