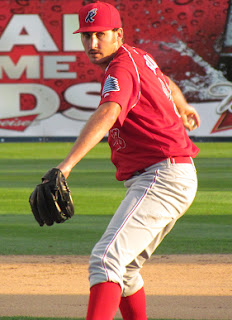 Right-handed pitcher Kyle Simon was acquired last June by the Phillies in the trade that sent Jim Thome to the Baltimore Orioles.  His side-angled delivery, sweet mustache and excellent numbers made him stand out after joining the Phils organization.

The 22-year-old sports a repertoire that features a low-90's fastball with sinking movement, a split and a plus slider. Simon is as automatic of a ground ball out in key situations as the Phillies have in their developmental ranks.

Simon, who stands 6-foot-5 and is listed at 225 pounds, was moved to the bullpen upon joining the Phillies organization, tallying a 3-0 record with a 1.26 ERA in seven outings for Class A Advanced Clearwater.  Soon after, he was promoted to Double-A Reading, where he went 1-0 with a 1.42 ERA in 13 regular season outings.

Overall with the Threshers and R-Phils, Simon held opponents to a .165 batting average against.  Additionally, Simon starred in a playoff outing for Reading in September, retiring all eight batters he faced, to help the club lock down a win against division rival Trenton.

Prior to the trade, Simon was appearing as a starter for the Frederick Keys of the Class A Advanced Carolina League.  In 14 starts there, Simon posted a 2-8 record along with a 3.96 ERA.

Current Phillies director of player development, Joe Jordan, previously had been the scouting director in Baltimore and sought out Simon when the Orioles became interested in Thome last year.  Simon began his pro career as a reliever after being drafted in the 4th round by the O's, putting together a 1-2 record with a 2.16 ERA in 14 combined appearances in the short-season New York-Penn League and the Class A South Atlantic League in 2011.  Jordan, knowing that Simon's success would come more easily out of the bullpen, made sure to end the Los Alamitos, CA native's starting rotation assignment.

The University of Arizona product has a preference for relief work, finding the relaxing approach to beginning a game hanging out in the 'pen and the potential to pitch more regularly and in pressure situations more appealing.  During the 2011 college season, however, Simon was the ace of the Arizona Wildcats' staff, as a member of their rotation, sporting an 11-3 record with a 2.72 ERA and five complete games in 19 outings (18 starts).

Simon spent some time this off-season in the Arizona Fall League where he struggled a bit, allowing 12 earned runs in 12 innings pitched for Peoria. There, he served as a member of the Javelinas' starting rotation, perhaps further proving he should stick to relieving.

Look for Simon to return to Reading, at the start of the 2013 season with the sky as the limit for a guy with his skills.

Anonymous said…
You actually make it seem so easy with your presentation but I find this matter to be actually
something that I think I would never understand. It seems
too complicated and extremely broad for me. I'm looking forward for your next post, I will try to get the hang of it!