Cloyd Proving Himself Ready for the Next Step 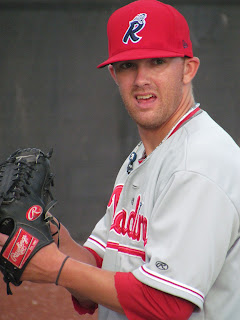 Tyler Cloyd feels no heightened sense of urgency to climb the developmental ladder because of his age. The righty starter, who will turn 25-years-old on May 16th, has all but exceeded everyone’s expectations of his ceiling, clearly proving, with a very solid 2011 campaign and an exceptional first month of this season, that he can compete at the highest levels of the minor leagues.

An 18th round draft selection in 2008, Cloyd made his professional debut that year, posting a 7-4 record with a 3.91 ERA in 14 outings combined with the rookie level Gulf Coast League Phillies and short-season Williamsport. Since then, the Nebraska native has had winning records every season, while alternating between starting and relief duties.

Cloyd made a considerable impact last year, following up a season in which he sported an unimpressive 5.17 ERA in 37 combined games (5 starts) with Class A Advanced Clearwater and Double-A Reading to serve up a 9-4 record and a 2.77 ERA overall in 2011, splitting time with Clearwater and Reading once again.

Officially on the prospect map, heading into the 2012 season, Cloyd was called upon to fill in for suspended Triple-A hurler Dave Bush on opening day this season. He took that opportunity to shine, throwing 6 shutout innings, allowing no baserunners and striking out 8 batters.

In his three starts that followed, after returning to Double-A, Cloyd has been nearly as sharp, posting a 3-0 record with a 2.37 ERA and 13 strike outs in 19 innings. Even more remarkable is that Cloyd has yet to allow a walk this season.

Many minor leaguers would be considered to have aged themselves right out of prospect consideration by the age of 25, but that’s not something that bothers Cloyd. He keeps a focus on performance, regardless of the level he is assigned to.

"For me it's just- I do what I can, where I'm at. I'm not in a big hurry to move. Whenever the Phillies want to move me, then that's their decision to make,” Cloyd said in an exclusive interview. “For me, I try not to get too caught up into that. I do what I can, where I'm at, every five days when I go out on the field. I just do what I can and go out there and show them that I can do this. As far as me moving up, obviously, I want to get back up there and keep climbing the ladder, but when that is would be up to the Phillies.”

Reading manager Dusty Wathan, who has coached Cloyd at four different levels of the Phillies’ developmental system, feels that there’s a definite place in baseball for a versatile pitcher like Cloyd.

The 6-foot-3-inch 210-pounder has a fastball that typically maxes out at 87 MPH, but the lack of great heat doesn’t stop Cloyd from shutting down the competition. Cloyd has shown so much progress in the past couple seasons thanks to some adjustments to his pitch repertoire. Ditching one offering that had not proven successful, for an option with more movement, has increased the damage he is able to do on the mound.

"I got rid of my slider and started throwing a cutter,” said Cloyd. “I've also been working on more of a curve ball pitch to get away from more of the speed change and the deception and the movement change.”

What has also helped Cloyd excel has been bursting levels of confidence that have just gradually brewed and bubbled over. He’s become a young minor league veteran that knows he can command every aspect of his game and he is capable of dictating the pace of a contest, no matter what the scenario may be.

"Obviously, momentum is a big thing for me, in any situation of the game. When I go out there, and everything's working pretty good, it just helps out the next inning and the next inning and the next inning…I try to keep the game one speed, and that's my speed. Whatever I want that speed to be. If I want it to be going quick, then I'll make the batter get in the box and I'll be ready for my pitches right away. If I want to slow it down, or I need to slow it down…I go out there and I try not to get flustered too often."

Greg V. said…
I see Tyler Cloyd working his way into the mix the way Kendrick, Happ, and Worley did. They were never the big time prospects that say Carrasco or Drabek were (and now May). With Blanton coming off the books next season, one wonders if there is room at the inn for Cloyd. I saw his game in LHV and he had great mound presence and looked in control the whole time (as one would throwing 6 perfect frames). He's pitching his way onto the map.
April 29, 2012 at 9:33 AM

Jay Floyd said…
Yeah, if Wathan, who caught in the minors for years, has that opinion of his ceiling, that should mean something.