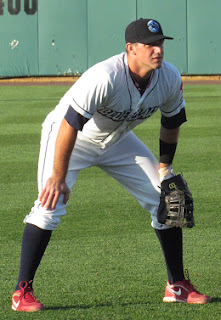 Throughout the 1990’s and into the 2000’s, Bob Stumpo, a resident of Wilmington, DE, grew up rooting for his local Major League Baseball team, the Philadelphia Phillies. Currently, Stumpo is a catcher/first baseman for the Phillies Class A affiliate, the Lakewood BlueClaws in the South Atlantic League, where is developing into a player worthy of wearing a Philadelphia uniform.

Through 14 games with Lakewood, the switch-hitting Stumpo has posted a .314 batting average with 2 doubles, a triple and 7 RBI. Prior to joining Lakewood, Stumpo sported a .313 average in 4 games with the Class A Advanced Clearwater Threshers. In the two seasons prior, Stumpo combined to bat .243 with 1 HR and 26 RBI in 67 combined games at three levels.

Back in June, 2010, Stumpo, a West Chester University graduate, was stunned to hear his name selected by his favorite club during the annual Major League Baseball amateur draft (33rd round). He describes that draft day as one of the most remarkable moments of his life.

"When the Phillies called my name on draft day, I was really excited,” Stumpo, whose father is a Phillies season ticket holder, recently told PhoulBallz.com's Jay Floyd. “I talked to them before the draft and I thought it might happen, but getting drafted by the team you've been following your whole life is really exciting. Hopefully, I can keep moving up and up and be out in Citizens Bank Park one day. It's almost a dream come true.”

Almost is a meaningful element to that statement for the 6-foot-3-inch 225-pounder. His ultimate goal is to one day don the catcher’s pads for his big league parent club. In the meantime, though, Stumpo speaks like a mature, media savvy Phillie player already. Asked about the troublesome stats belonging to Lakewood’s starting rotation (two hurlers have ERA’s of 6 or greater, while another has an ERA of 4.67, and only one has a winning record), Stumpo put a positive spin on the progress of the pitchers that he helps guide and refocused the negative on the bright futures each hurler could have.

"It's a talented group. I mean, all of them can pitch, we know that. It's a different situation, where some guys have never been on a full season team, you know, they were down in Florida, in extended or things like that, going to short-season, so it's a process of getting used to it and stuff, especially playing up in the cold for a couple weeks, early in the season. But, there's a lot of talent in this starting rotation, so I don't think it's going to be a problem. (I’m) just trying to lead them in the right way,” Stumpo said.

The 24–year-old Stumpo grew up rooting for many of the same players that loads of similarly aged members of the Phillies Nation did during their formative years. Names like Jim Thome, Ryan Howard and Shane Victorino stand out as individuals that Stumpo looked up to and modeled his playing style after. But there is one player that stands out just a bit more to Stumpo, who fashions his hard-nosed on-field grind after one of Philadelphia’s hardest playing athletes.

"I’ve always loved how Chase Utley played the game,” Stumpo said with admiration. “It just stands out, how hard he plays. Utley's number one, of guys to watch and learn from, just because of how intense he is and how he plays the game. He never takes a play off and never takes a pitch off. I'd say I watched Utley the most."

Stumpo’s demeanor and skills make him stand out as a leader, which is impressive, in just his second full season in the minors. Lakewood manager, former Phillies All-Star Mickey Morandini, coached Stumpo last season in Williamsport and recognizes Stumpo’s ability to be a field general and a positive influence on his team off the field. According to Stumpo, while his demotion from Clearwater to Lakewood in April was beneficial and mainly focused on getting him additional at bats, he thinks Morandini had a little something to do with the move.

“I'm an older guy and I was with Mickey last year and I think he wanted to get me up here, and get me more playing time, and help out around the clubhouse, and help the younger guys and things like that,” Stumpo said.

While he is pleased with his current spot in the organization and credits an aggressive approach with a focus on working the count for his success thus far with Lakewood, Stumpo is always focused on reaching the next level and has a simple Phillie-centric outlook toward attaining his goals and climbing the developmental ladder.

“(I) just try to help my team, anyway I can, whenever I get the chance…even helping other guys.”

That’s how Phillies do it. That’s Bob Stumpo.