Ruf Focused on Performance, Not Obstacles 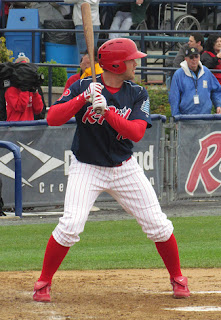 The term prospect is typically reserved for younger players who display considerable talent in the minor leagues and tends to skip those players that might be of a more advanced age.  The omission associated with the way older players can be overlooked doesn't bother 25-year-old Reading Phillies first baseman Darin Ruf, who has developed into an impact player and has proven to be his team's standout offensive star.

Through 26 games for the R-Phils in the Double-A Eastern League, Ruf has posted impressive numbers, tallying a .362 batting average with 2 homeruns, 11 RBI and 15 runs scored.

A 20th round draft pick by the Phillies in 2009, Ruf has steadily progressed upward in the developmental system during his time as a pro, having made stops in the rookie level Gulf Coast League, Class A Lakewood, Class A Advanced Clearwater and now with Reading.

A solid performer at the plate last year with a .308 average, 17 HR and 82 RBI with Clearwater in the Florida State League, Ruf credits his time playing as a member of the Scottsdale Scorpions last autumn with benefiting his offensive development.

"I think a lot of my success can be attributed to my time in the Arizona Fall League.  I got a lot of good learning in, out there.  I got to pick the brains of some different coaches and some of the players...guys that have had success at the big league level and everything like that," Ruf stated.

The Creighton University product also acknowledges his four years of collegiate baseball as being helpful in developing the type of player mindset that has become prevalent in today's game.

"It's a very fundamentally sound program.  It's built from defense and playing a little small ball, bunting here and there.  It's actually kind of what the Major League game is almost going back to, and what they're stressing, at least since I got in the organization, is situational hitting, things like that, which ultimately win games.  Not sitting around waiting for a 3-run homerun, to put runs on the board, you have to move runners and you have to get them in when they're on 3rd with less than 2 outs," Ruf said.

Even with all the essential elements, a minor leaguer that is deemed old can have issues within his organization.  Slugger Matt Rizzotti is one recent example of a player that the Phillies felt had reached his ceiling in relation to progress, despite his proven success at the Double-A and Triple-A levels.  Judgement by the brass isn't something that Ruf sweats.

"I think all four-year college (players) are in the same boat," Ruf said with a laugh.  "I'm always going to be old for whatever level I'm playing at, in terms of prospect ages and stuff like that, but it doesn't really bother me.  It'll always be a disadvantage, I guess, but if you can play, you can play."

In an organization where former National League Most Valuable Player Ryan Howard is signed with the big league Phillies, to man first base, through at least the 2016 season, players downward on the developmental ladder would clearly seem blocked.  And with another older prospect, the versatile Cody Overbeck, holding that same position at the Triple-A level with Lehigh Valley, there's even more talent in the way.  That fact is something Ruf admits to pondering, but he chooses to channel the majority of his thoughts away from things he has no control over and more toward what he can have an effect on, which is playing hard and contributing where ever he is assigned.

"It runs through your mind every now and again, but you can only control what you can control.  And I can control going out and giving a good effort every day where I'm at, at the current time.  I have a bunch of respect for Cody.  I got to play with him in Arizona and I have a relationship with him.  And I've gotten to talk with Ryan at times, when I've been over for a couple spring training games, and he's been nothing but the nicest guy.  So, you just wish them the best and hope they do well and hope that you get an opportunity and take advantage of it."

With a terrific frame of mind and a skill set that is clearly progressing, Darin Ruf could be the individual that breaks the trend of older players who don't quite make that jump to the top level of the game and could very well overcome the obstruction of talent that lies ahead in the Philadelphia organization.

Jay Floyd said…
Yeah, he's certainly one that is impressing everyone right now.

I asked him if he thinks about kind of auditioning for jobs elsewhere, as many prospects do, and he said that doesn't really cross his mind.
May 12, 2012 at 2:10 PM