By Jay Floyd May 25, 2012
This week the Ft. Myers Miracle (Twins affiliate) hosted a couple noteworthy promotions when they played against the Phillies' Class A Advanced club, the Clearwater Threshers.  Thanks to the Twitter feeds of a couple Threshers players, we got an inside look at some behind-the-scenes action.

On Wednesday, the Miracle held their annual tribute to the Negro Leagues, when they donned the uniforms of the Newark Eagles while Clearwater represented the Homestead Grays.   Starting pitcher Perci Garner posted the below image of himself, along with some teammates including Tyler Knigge, Jesse Biddle and Ryan Duke, sporting the Grays gear. 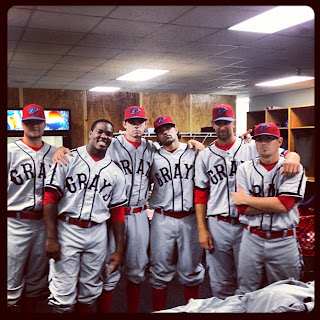 In addition, surging third base prospect Cody Asche took time prior to Thursday's "School is Out for Summer" promotion to pose for a photo with the most famous television school principal ever, "Mr. Belding" from Saved by the Bell, actor Dennis Haskins. 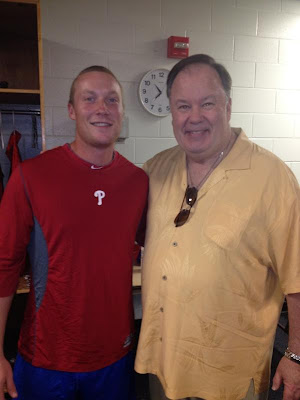 Anonymous said…
I just like the helpful info you supply to your articles.
I'll bookmark your bloog and test once more here frequently.
I am rather sure I will bee told many new stuff
proper here! Good luck for the following!