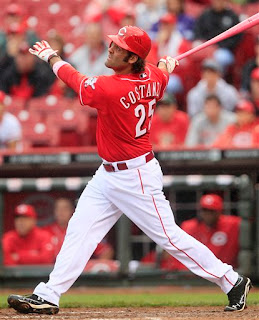 After a lengthy career in the minors, Mike Costanzo, who was a promising young third baseman in the Phillies system several years back, is finally living his dream of playing big league baseball. The life-long Philadelphia sports fan and resident of the city's suburbs, was selected in the 2nd round of the 2005 MLB amateur draft by his hometown club, but struggled in recent years and, to some, looked to be a bust.

Following a few productive years in the Phillies' developmental ranks, Costanzo was traded to Houston, along with Michael Bourn and Geoff Geary, for Brad Lidge and Eric Bruntlett following the 2007 season. That year, his second full season as a pro, Costanzo batted .270 while lacing 27 homers and driving in 86 runs for the Reading Phillies. Costanzo was then flipped in another deal, during the same off-season, to the Orioles for All-Star Miguel Tejada.

The road to the big leagues was a long one for the determined Costanzo. After his impressive season at Double-A in 2007, his production faltered. As he took a step upward to Triple-A in 2008, Costanzo struggled and saw his OPS dip 130 points from the previous season. The following year, Costanzo split time between Double-A Bowie and Triple-A Norfolk, posting improved numbers, but Baltimore didn’t see big league potential in the 6-foor-3-inch 215-pounder and he did not return to the organization the following season.

Back at home as a free agent, Costanzo signed with the independent Camden Riversharks of the Atlantic League. In 2010, Costanzo played just 16 games there before Cincinnati called to offer him a contract with an affiliated team.

In each of the past three seasons, including this year, the lefty hitting Costanzo has split time at the Double-A level and the Triple-A level in the Reds organization. Overall in the minors, since joining Cincinnati, Costanzo has posted a .263 batting average with 30 HR and 137 RBI in 248 games played.

Last week, the Coastal Carolina University product made his Major League debut after nearly 8 long years in the minor leagues. He did so by driving in a run on a sacrifice fly against Washington’s Edwin Jackson.

Ironically, for Costanzo, he got the call that he was finally being promoted to the Majors at the expense of another third baseman that was selected in the second round by Philadelphia. Scott Rolen, a 1993 draft pick, was placed on the disabled list with a shoulder strain and left a vacancy for the 28-year-old Costanzo to realize his dream of reaching the big leagues.  Rolen had been a guy Costanzo looked up to, prior to turning pro.

Everything about the experience of playing big league baseball was exciting for Costanzo, who was never sure if he would make it to the highest level of the sport he loved so much.

"A lot of emotions are running around in my head.  It's been quite a journey for me.  I'm ecstatic about being here," Costanzo told MLB.com recently.

On Saturday afternoon, against the Yankees in New York, the experience got just a little bit sweeter for Costanzo, as he notched his first big league hit. The single came against right-hander Ivan Nova.

In the MLB.com piece, Costanzo stated that he never once gave up on his dream of playing big league baseball.

"I love baseball," Costanzo said.  "Definitely being 28 and in Triple-A the last five years, going to indy ball and doing all that stuff, it makes you wonder sometimes. Never did I want to stop playing."

Mike Powers said…
Such a great article. I remember in '07 when I when I went to a Reading Phillies game and saw Costanzo's stats in centerfield. I thought to myself, "Why haven't the Phillies given this guy a chance?" Then he was dealt to Houston and I heard nothing from him, but I always still wondered what he could do in the big leagues. It was good to see this article paying attention to this kid. Good for him for persevering through the minors and the Riversharks. I like the irony in replacing Scott Rollen because he was my favorite Phillie growing up.
May 21, 2012 at 2:08 PM

Mike Powers said…
Such a great article. I remember in '07 when I when I went to a Reading Phillies game and saw Costanzo's stats in centerfield. I thought to myself, "Why haven't the Phillies given this guy a chance?" Then he was dealt to Houston and I heard nothing from him, but I always still wondered what he could do in the big leagues. It was good to see this article paying attention to this kid. Good for him for persevering through the minors and the Riversharks. I like the irony in replacing Scott Rollen because he was my favorite Phillie growing up.
May 21, 2012 at 2:08 PM

Jay Floyd said…
Yes, Costanzo was always a very likeable individual and was a guy I had high hopes for as well.