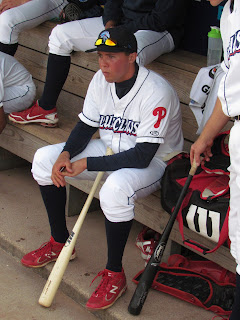 Lakewood BlueClaws first baseman Kelly Dugan has been somewhat forgotten by many people that follow prospects throughout the minor leagues.

A flurry of physical setbacks have prevented the Phillies’ top selection from the 2009 MLB amateur draft (2nd round, 75th pick overall) from progressing through the system with any type of commanding push.

This year, however, Kelly, the son of film director Dennis Dugan (Happy Gilmore, Big Daddy), hopes to make enough of a splash in the Class A South Atlantic League to rekindle some of the excitement that surrounded him when he was originally selected by the Phils.

The level of instant popularity that came Dugan's way upon joining the Phillies organization could have been credited to an image taken on draft day from the set of his father's film, Grown Ups, which starred Adam Sandler, Kevin James, Chris Rock and David Spade. With the closely knit star power involved and the collection of widely-known actors all sporting Phillies caps, fans and media alike were ready to see this Hollywood endorsed ballplayer make an impact in the pros.

Unfortunately for the 21-year-old Dugan, injuries have hindered his progress.

In 2010, Dugan dealt with a staph infection after being hit with a batted ball during batting practice, which resulted in him missing a large chunk of the season. The history of disabled list stints left Dugan in disbelief, like last month when he turned his left ankle badly while stepping on first base and fielding a throw on a close play. The damage to the ankle was only a sprain, despite awful looking bruises and substantial swelling. Dugan was grateful for only needing to miss about two weeks of action with his latest ailment.

“When you get injured, you can't really move up,” Dugan told me recently. “You need to take at bats at each level and you have to show that you can produce at the level before they're going to move you up, so you just end up repeating. It was frustrating, but it just makes me grateful that I can go out and play right now.”

Last season, the 6-foot-3, 195-pound Dugan was named a NY-Penn League All-Star as an outfielder in his second campaign with the short-season Williamsport Crosscutters, batting .284 with four doubles, four triples, two home runs and 21 RBI in 47 games.

His change in position this year -- although he did play some first base last season -- was forced by a hamstring issue in spring training. The Phillies thought it was best to place the youngster in a spot that would reduce his need to run in the field. Dugan could certainly see his defensive assignment change again if the need arises or if circumstances dictate a change.

With his own positional future lacking clarity, Dugan is focused on stepping up all aspects of his game, even at a position that supposedly provides a light workload. And he is willing to man any position so long as it means he is playing regularly.

"I just want to be in the lineup," Dugan said. "I played first base in high school and I played outfield. So, [at this level], you just have to work [on defense] every single day... just like hitting. Just like you hit in the cage and work on your hitting, you have to work on your fielding."

Since returning from his most recent injury, the switch-hitting Dugan has been a strong performer, posting a .275 batting average with six doubles, a triple and two homers in 15 games.

Lakewood’s manager, former Phillies All-Star Mickey Morandini, sees loads of potential in Dugan and likes that the club's standout performer of late continues to show improvements in his offensive game.

"He's been hitting the ball really well, especially since he's come back from the ankle injury,” Morandini said. “What I really like is that he's showing some pop, some power. He's driving the ball really well, he's hitting doubles. He hit a home run, opposite field (recently) and hit a couple other balls that almost got out of here in the gap. So, we really like the way he's swinging the bat. He's being aggressive, hitting the fastball real well."