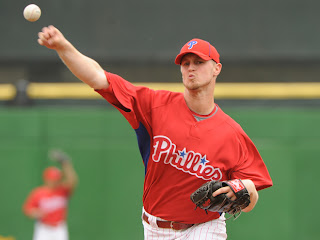 For the second time this season, righty Kyle Kendrick will fill in for an injured member of the Phils' starting rotation and face Cubs hurler Matt Garza.  Last time, Kendrick pitched in place of Cliff Lee, while he takes Vance Worley's turn this time around.  Worley is slated to miss a start, as he deals with soreness in his throwing arm.

The switch could be a break for Chicago, as Worley has been a strong contributor (3-1, 2.81 ERA in his last 5 games) for the Phillies while Kendrick has struggled greatly this year.

Last season, the Phillies won 2 of 3 meetings with the Cubs at Wrigley Field.

Read ahead for more information on the pitching match ups for this series and well as many more statistical nuggets.

In 19 road games this year, Freddy Galvis has posted a .164 batting average.  Galvis' 15 RBI rank 3rd best on the Phillies.

Alfonso Soriano is a .252 career hitter in 54 games against the Phillies. Soriano, who has hit 20 or more homeruns for each of the past ten seasons, hit his first homerun of the season against St. Louis on Tuesday.

Former Phillies prospect Adrian Cardenas made his Major League debut with the Cubs last week and, since then, he has gone 1-for-10 (.100 average). Cardenas was dealt away in the 2008 Joe Blanton trade.

In 14 home games this season, Cubs catcher Geovany Soto has posted a .125 average.