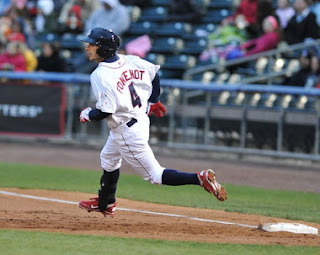 At Triple-A Lehigh Valley, Mike Fontenot, who was signed by the Phillies last month as a free agent after being released by San Francisco late in spring training, has been performing quite well to the tune of a .308 batting average with 5 doubles and 6 RBI in a dozen games.  Meanwhile, the Philadelphia offense has struggled considerably, as they tallied the 3rd lowest OPS in the National League entering action on Monday.

Change is needed and the team clearly realizes it. Manager Charlie Manuel has used 25 different lineups in 30 games this season.  None have clicked particularly well.

Fontenot, 31, is a career .263 hitter in six big league seasons.  The lefty hitting former 1st round draft pick of the Orioles (2001) had the most successful season of his career in 2009 with the Cubs, when he mashed 9 homeruns and drove in 43 runs in 135 games.

On the defensive side, Fontenot has played 286 games at 2nd base, 50 games at shortstop and 77 games at 3rd base in the Majors.  The Louisiana State product also has a .976 fielding percentage in his career.

Additionally, Fontenot's .738 career OPS in the big leagues stands out as being plenty reliable from a backup infielder that would be filling in until All-Star Chase Utley makes a return from a knee ailment.

What could really force the Phillies' hand to make such a move may be the output of another player.  After his 0-for-4 effort in Monday night's series opener against the New York Mets, Phils rookie second baseman Freddy Galvis lowered his batting average on the season to .189 while his OPS dropped to .504 through 30 games.

One bonus with potentially swapping Galvis and Fontenot on the rosters would be that the 22-year-old Galvis could return to the International League where he proved he could compete last year and gain a boost in confidence.

Utility infielder Pete Orr along with his very respectable .276 batting average and a .714 OPS this season, would not likely be on the chopping block, if the Phillies were itching to promote Fontenot.

So, while many folks witness the repeated failures of the varied lineups and wonder what changes the Phillies can make to improve the offense...the beginning to a remedy could be as simple as making a switch at second base, using some organizational depth.  Is it time for such a change?  The answer could be Fonte-YES.

OBC said…
Yeah...enough is enough. Batting under .200 is not going to keep any player in the bigs.