Series Preview: Phillies at Nationals, May 4-6 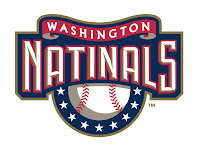 The Nationals' efforts to take back their park have earned big time attention from the media and fans alike, but for the teams on the field it will simply be the first of several series this season against a formidable division rival.

In that division, the National League East, Washington and Philadelphia have reversed roles, somewhat, as the Nationals (16-9) have steadily been considerably far back in the standings in recent years, behind the Phillies (13-13).  However, now, it is the five-time defending division champions that find themselves in 4th place 3 1/2 games behind the division leading Nats.

As the clubs begin a 3-game series, the Phillies will send right-hander Kyle Kendrick, who will be making his third start in place of injured ace Cliff Lee, to the mound for the series opener.  He'll be faced by the Nationals' top hurler Stephen Strasburg, who was drafted first overall by Washington back in 2009.

Last season, the Nationals won the season series against the Phils, taking 10 of 18 meetings, including 5 of 9 at Nationals Park.

Read ahead for more details on the pitching match ups and loads more statistical information on this key series.

In 13 home games this year, Jayson Werth is 16-for-47 (.340 avg).  Werth is 0-for-13 combined against the three scheduled Phillies starting pitchers for this series.

Adam LaRoche has a .302 average in 72 games against the Phillies in his career.  LaRoche's 4 HR and 17 RBI are tops on the Nats.

Teenage phenom Bryce Harper is 6-for-16 (.375 avg) since making his MLB debut last week.  It has been less than a year since Harper played against the Phillies' Class A team in Lakewood, NJ on his way up the ladder toward the big leagues.

Heading into action on Thursday, the Nats led the National League with a 2.47 ERA.  The Phillies ranked 6th with a 3.38 mark.