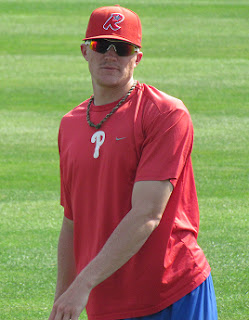 Diekman, 25, has posted sparkling numbers dating back to last year.  Over 16 combined relief outings in the Arizona Fall League and in Major League spring training this year, Diekman posted a 0.55 ERA with 23 strike outs and 7 walks.  The Nebraska native followed that up by allowing just 1 earned run through 12 relief innings, while striking out 22 and walking just 3 batters with the IronPigs.

Diekman, a 30th round pick of the Phillies in the 2007 amateur draft, sports a fastball that reaches 95 MPH, a solid slider and a deceiving change up. He was ranked 18th on the 2012 PhilliesNation top prospects countdown.

Valdes was signed by the Phillies last October as a free agent and has big league experience with the Yankees and St. Louis.  In 51 Major League games, Valdes has posted a 3-4 record with 4.58 ERA and a .265 batting average against.  This season with the IronPigs, the Cuba native was 1-2 with 1 save and a 3.86 ERA while producing an impressive 26/1 strike out/walk ratio in 21 innings pitched over 11 relief outings.

The additions to the relief corps should help solidify a Phillies bullpen that has shown considerable weakness this season, serving up a Major League worst 5.59 ERA in 31 games. The struggles have gotten worse recently, as Phillies relievers have allowed 19 earned runs in 16 2/3 innings over the past six games, leaving no question that some changes in the bullpen were necessary.

Luna, who signed as a free agent for organizational depth this past off-season, is a career utility man, who has big league experience at every position besides catcher and pitcher.

Through 29 games this season for the IronPigs, the righty batting Dominican native posted a .274 batting average with 8 doubles, 1 triple, 1 HR and 12 RBI. The 32-year-old Luna has played in the Majors with St. Louis, Toronto, Cleveland and Miami.

Greg V. said…
Diekman's been on my radar since I saw him in Reading last year. I'm a sucker for sidearm southpaws I suppose but he was recording outs as well. Glad to see him coming up to help the big club.
May 10, 2012 at 4:42 PM