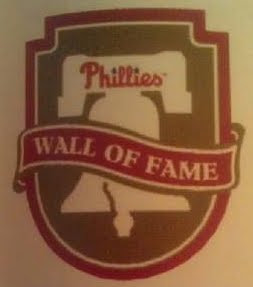 This past week the Phillies announced twelve nominees for the team's Wall of Fame. Annually, the Phils induct one individual that has made great contributions to the organization. Voting is being hosted at Phillies.com and will last through March 14th, as the field of options for the annual lone honoree is narrowed.

Fans are able to vote for three different Phillies alumni and each vote is applied points, based on placement. A first place vote gets 5 points, a second place vote gets 3 points, and a third place vote gets 1 point. Following the deadline, the five individuals with the top point totals will be placed on the official ballot, which will be voted on by the official Wall of Fame Selection Committee, who will determine the man who will join the top names in team history in Ashburn Alley at Philadelphia's Citizens Bank Park.

Vice President of Alumni Relations, Larry Shenk, informed me in 2010 that, "The Phillies Wall of Fame Selection Committee is composed of 15 persons. It includes Phillies executives, baseball writers both locally and nationally, Phillies historians, one of our broadcasters, someone from Comcast SportsNet (and representatives from two local sports radio stations)."

So, who are the nominees, you wonder? The list of options is as follows:

And...who is deserving of your vote, you also wonder? Well, information on that and some opinion lies ahead.

Christenson, a first round draft choice of the Phillies in 1972, posted an 83-71 record with a 3.79 ERA in 243 career games, all with Philadelphia. Christenson pitched in four different postseasons, but his ERA in 6 playoff outings was 7.40. And although he made his big league debut at the age of 19, and pitched in the big leagues with the Phillies in 11 different seasons, his stats are not worthy of legendary status.

Konstanty, the Most Valuable Player of the National League in 1950, was a key part of the pennant winning Phils roster that year. However, his great single season (16-7, 22 saves, 2.66 ERA, All-Star nod) is outweighed by his other six seasons with the Phillies (35-32 record, 32 saves, 3.92 ERA, no other awards or All-Star nominations). One great season does not earn a person a spot on the Wall of Fame next to Hall of Famers and major contributors to the history of the organization.

Reed ranks first in team history in relief wins (54) and relief innings pitched (763). He also pitched in six different postseasons with the Phillies, counting 1981's divisional series for the strike shortened season. Reed certainly made a significant impact on the Phillies' past, but I am not convinced he's at an elite level for the organization's top historical performers.

Schilling was the MVP of the 1993 National League Championship Series. During his time with the Phillies, he was named an All-Star three times and led the league in complete games and strikeouts twice. He ranks sixth in team history in wins (with 101) and is fourth in strikeouts (with 1,554). Overall, those marks, along with his 101-78 record and 3.35 ERA as a Phillie, might be worthy of consideration, but with all of his World Series rings (Arizona in 2001 and Boston in 2004 and 2007), Schilling's got other places that will immortalize him in some fashion.

Wise once threw a no-hitter against the Reds and hit TWO homeruns in the same game. However, his overall stats with the Phillies in 7 seasons (75-76 record, 3.60 ERA) are not overly impressive. One tremendous game and a losing record does not earn someone a spot next to organizational legends. In addition, Wise is another hurler that saw his best success with Boston, as he locked down two postseason wins for the Red Sox in 1975. Wise's biggest contribution to Philadelphia baseball was when he was traded for Steve Carlton in 1972.

Lieberthal was another first round draft selection by the Phillies and ranks tops all-time in games caught for the Phils, with 1,139. His career statistics with Philadelphia (.275 avg., .788 OPS, 150 HR, 610 RBI) simply aren't the types that render someone a Wall of Fame player.

The Philadelphia-born Wilson was once an All-Star with the Phillies, but to point out exactly the sort of impact his .288 average, 22 HR and 315 RBI had in 11 seasons with the team, his first name is misspelled (Jimmy instead of Jimmie) on the official online ballot.

One-time All-Star Pinky Whitney and his .307 career average, .789 OPS, 69 HR and 734 RBI won't qualify for the Phillies Wall of Fame unless they institute a cool names division.

Gross holds the Phillies' record for pinch hits with 117. That is surely an impressive mark, especially considering that the next closest total is Tony Taylor's 53, but that consistent activity in a pinch hitting role stands out as clear evidence that Gross was not on the field for a great majority of his time as an active player. Many would feel that reserves should not be placed among the immortals of the organization.

Fregosi managed the Phillies to the NL pennant in 1993, as they notched a 97-65 record. In his other 5 seasons as Phils manager, the team tallied a 334-398 record (.456 win percentage). Just like Konstanty, one remarkable year does not make a large enough impact, or outweigh the other years of mediocrity. Fregosi is not qualified for such an honor.

So, with all of these unworthy and questionable candidates, who is missing as a more-than-valid option to prevent Curt Schilling from continuing what has become the "Favorite Players from 1993 Club" in recent years (Darren Daulton was enshrined in 2010, while John Kruk made the Wall in 2011)? Who should be the first man to represent the most recent string of success and receive the massive acknowledgement as being an all-time team great? Pat Burrell should be an option this year to have his face and name eternalized beside the likes of Larry Bowa, Robin Roberts and Chuck Klein.

Burrell, who recently made his retirement from baseball official, holds more significance in Phillies history than these other options. Without Burrell, who was the top overall draft pick by Philadelphia in 1998 and ranks 4th in team history in HR (241), 8th in RBI (827) and 5th in walks (785), the Phils don't break their playoff drought in 2007 and would not have won the World Series the following year. Burrell hit 30 or more homeruns in a season four times in his career and exceeded 100 RBI in a season twice.

The Philadelphia organization owes it to their fans to have a true highly significant PHILLIES figure to best represent the team on that Wall of Fame.

Another great potential nominee would have been former Phillies general manager Pat Gillick, who was at the helm for the 2008 World Series win. While Gillick was not the big cheese when the Phillies drafted their core of talent (Jimmy Rollins, Cole Hamels, Chase Utley and Ryan Howard), he was the man who added the necessary pieces (Jamie Moyer, Jayson Werth, Pedro Feliz and Brad Lidge) to complete a championship roster.