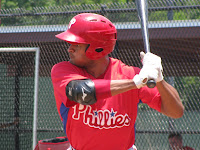 Having dealt with a series of significant injuries since joining the Phillies organization in the December 2009 trade that sent Cliff Lee to Seattle, outfielder Tyson Gillies has become somewhat of an afterthought. Having only played in 31 total regular season games since joining the Philadelphia organization, the lefty batting speedster has not been able to prove himself worthy of the high praise that led to his inclusion in that deal and earned him a spot among the players in the 2009 MLB Futures Game.

Growing up in British Columbia, Gillies played both hockey and baseball. However, in his teenage years, Gillies felt that it was best to choose one sport to focus on and, as determined by his size at the time, he selected baseball. As he progressed as a player, his love and passion for that great game developed along with his talents and he has never looked back.

A 25th round draft selection of the Mariners in the 2006 amateur draft, Gillies began his professional career the following year, as a member of the Arizona League Mariners and later with Everett of the Class A Northwest League. Combined at the two levels, Gillies posted a .255 batting average with 11 steals and a .688 OPS in 39 games.

In 2008 Gillies continued to show improvement, spending time with Everett before earning a promotion to Class A Advanced High Desert. In 72 combined games that season, Gillies' production shot upward as he batted .302 with 25 steals and an .831 OPS in 72 games.

During a return campaign with High Desert, in 2009, Gillies became a highly regarded prospect, as his offensive output excelled even more. Gillies posted a .341 batting average, good enough for third highest in the minors, with 44 steals and a .916 OPS in 124 games.

Since the trade that brought Gillies to Philadelphia along with J.C. Ramirez and Phillippe Aumont, the Iowa Western Community College product has seemed fragile. Recurring hamstring issues and a nagging foot injury have kept Gillies out of action. The 23-year-old grew healthy as the 2011 regular season came to a close, but the Phillies did not wish to rush Gillies back to action too soon, as that had contributed to the repeat ailments in the past, so he continued to rest and rehab.

Gillies was assigned to the Arizona Fall League this off-season, where he struggled considerably at the plate (.178/.302/.233 line in 27 games), but considering the main goal was for him to play a month of healthy baseball and not necessarily mash opposing pitchers, his time there was considered a huge success.

Following AFL play, Gillies spent much of his off-season working out at the Phillies' spring training facilities in Clearwater, FL. After months of hitting, fielding, running and weight training, Gillies has maintained full health and now looks forward to a 2012 with no physical setbacks.

A ground ball/line drive hitter that is known for using his speed to get on base, Gillies is also pretty well known for his hearing impairment. Diagnosed at an early age with significant hearing problems, the 6-foot-2-inch 195-pounder grew up using hearing aids and has become accustomed to playing baseball with a slight disadvantage. Despite what many consider a disability in a game where the crack of the bat could help a fielder judge the distance of a ball in flight, Gillies says for him, it's just natural and has no trouble tracking on defense.

Defensively, Gillies’ range was always a key to his game, but that will remain dependent on his health and speed to return on a lengthy basis. Primarily, Gillies has been a center fielder, however he has played all three outfield positions in his professional career. He has also displayed a strong throwing arm and an ability to gun down frisky runners.

Having been compared to All-Stars like Curtis Granderson and Shane Victorino in previous years, Gillies has a tall task ahead, if he is to reach that status. With projection to reach the majors as an attainable goal, Gillies must avoid injuries and continue to grow on the field. Expect the lefty hitting youngster to begin the season with Double-A Reading, where he'll get another shot at showing he can be an everyday player.
______________________________________________

OBC said…
Gillies needs to stay healthy. Two years and he has barely played at all. He better get his baseball game up the same way he has excelled at TWITTER!
February 16, 2012 at 6:24 PM