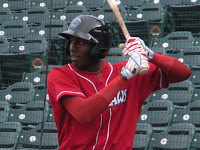 Originally drafted as a pitcher in the 22nd round of the 2007 draft, Jiwan James was converted to an everyday player in 2009. The switch-hitter has since earned recognition as a superb athlete and a rising star within the Phillies developmental ranks.

In his first season as an everyday player, James played in 30 games with short-season Class A Williamsport. As a member of the Crosscutters in the NY-Penn League, James batted .264 with a homer and 13 RBI.

The following season, James helped the Class A Lakewood BlueClaws lock down a second straight South Atlantic League title. The 6-foot-4-inch 185-pounder shined atop the batting order for SAL champs, setting a club record 24-game hitting streak in July. In the longest season of his career to that point, James posted a .270 average with 26 doubles, 6 triples, 5 homers and 64 RBI in 133 games played.

With the Class A Advanced Clearwater Threshers in 2011, the Williston High School (Florida) product had another good season. In 130 games in the Florida State League, James sported a .268 batting average while lacing 26 doubles, 6 triples, 4 HR and 38 RBI.

James has a tendency to heat up quite a bit at the plate in mid-season, then notoriously tapers off down the stretch, suggesting that fatigue is a factor for the youngster. In 2010 with Lakewood, James posted a .361 average in July, then slumped, batting .220 in regular season action the rest of the way. In 2011 with Clearwater, James rocked a .330 batting average in July and served up a lowly .234 average the remainder of the way in the regular season. It could be wise for James to participate in the Arizona Fall League in 2012 to test him and stretch him out a bit more.

His ability to drive the ball to the gaps is certainly something the Phillies wish to see more of, from James. It seems as though James' power is the part of his game that requires the most development. Adding some muscle mass is something coaches in the Phils' system have been waiting for the sixth year pro to do for some time.

While his quickness is a major plus in James' game, he has yet to have a massive season swiping bags. In 2010, James stole 33 bases, but sported a lackluster 62% success rate. His numbers improved a bit in 2011 as he safely stole 31 times in 47 tries (66% success), but not enough to be convinced that James will be among the elite in that department. However, as he progresses upward to levels that have actual first base coaches, instead of bench player void fillers, James should show some considerable improvements with his stolen base numbers.

Defensively, James’ range is tremendous. With a great ability to track balls and gun down runners on the bases, the thinly built speedster is a major asset in the outfield. The majority of his time has been spent as a center fielder, however James has dabbled, on occasion, in the other outfield spots. His positional conversion from pitching a few years ago was necessary due to a lingering arm issue that James dealt with in 2008.

James, whose given first name is Nathaniel (Jiwan is his middle name), was in Philadelphia recently for the organization’s off-season MLB Rookie Career Development Program and is looking forward to a big season in the local region with Double-A Reading in 2012.