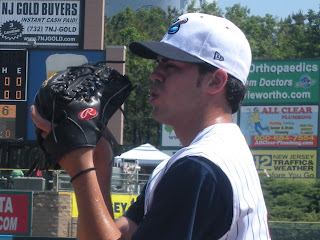 Right-handed pitcher Julio Rodriguez has quietly become one of the Phillies' most promising prospects in recent years. Without the hype and buzz that has surrounded other well-regarded youngsters within the Philadelphia organization, the Puerto Rican born hurler has proven himself worthy of being held in considerable regard by the Phils, their fans and talent evaluators alike.

Drafted in the 8th round of the 2008 amateur draft as a 17-year-old, Rodriguez made his professional debut that same year, throwing in 7 games with the Gulf Coast League Phillies. However, the 6-foot-4-inch 200-pounder struggled, as he sported a 12.19 ERA and a .383 batting average against.

The following season, back in the GCL, Rodriguez added some strength and made some serious improvements in the GCL, posting a 1-2 record with a 3.08 ERA and a .197 batting average against in 11 games (8 starts).

In 2010, as a 19-year-old, Rodriguez began the season in extended spring training, but joined the Class A Lakewood BlueClaws in May. He spent time with the short-season Williamsport Crosscutters as well that year, and finished with an overall record of 7-3 with a 1.89 ERA and a .175 batting average against in 20 outings (12 starts). J-Rod was a key contributor that helped Lakewood lock down their second straight South Atlantic League championship that year.

Last season with the Class A Advanced Clearwater Threshers, Rodriguez was named an end-of-season Florida State League All-Star as he had a stellar campaign. In 27 starts, Rodriguez finished with a league leading 16 wins, a 2.76 ERA that stood as second best in the FSL and a .186 batting average against.

Despite lacking blazing speed with a fastball the resides in the low-90's, Rodriguez has steadily recorded impressive strikeout totals. Averaging 10.71 strikeouts per 9 innings over the past two seasons, it is his excellent secondary pitches and his ability to keep batters guessing that help Rodriguez mow down the competition. Among his repertoire are a strong curveball that dives away from righty batters and a solid change up that has shown improvement at each level.

The 21-year-old is versatile, proven by his ability to handle the competition in any role, although sources within the organization have stated the Phillies think Rodriguez's future is as a starter.

This off-season, Rodriguez appeared in 6 games with the Gigantes de Carolina in the Puerto Rican Winter League. In those outings, all relief, he tallied no decisions and a 3.52 ERA.