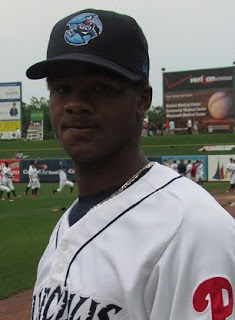 Righty hurler Lisalberto Bonilla was one of the fastest rising prospects in the Phillies organization last season. With an All-Star campaign for Class A Lakewood, the 21-year-old built on an already impressive two seasons as a pro, as he showed the world that it's not just Philadelphia's well-regarded "Baby Aces" that should have folks excited about the organization's developing young arms.

The 6-foot-1-inch 170-pounder was signed by the Phillies as an amateur free agent in December 2008. Bonilla began his professional career the following year with the Dominican Summer League team, posting a 6-2 record with a remarkable 1.41 ERA and 2 complete game shutouts in 11 starts.

In 2010, Bonilla split his time between the Gulf Coast League Phillies and the short-season Williamsport Crosscutters. As a starter in the GCL, Bonilla went 2-1 with a 1.95 ERA with 38 strike outs and 5 walks in 32 1/3 innings. After flying high, once he took a step upward, the youngster came back down to Earth, sporting a 1-3 record with a 6.49 ERA, 18 strike outs and 12 walks in 26 1/3 innings in 10 games (3 starts). Bonilla's problems in the NY-Penn League stemmed from difficulties locating his fastball, which was not an issue that lasted beyond that stop.

After participating in the Florida Instructional League, then beginning the 2011 season in extended spring training, Bonilla joined Lakewood's bullpen in early May and got himself right back on track. Within 6 weeks, the native of the Dominican Republic joined the starting rotation. By his fifth start, Bonilla was officially a prospect on the rise. In his July 6th outing against the Hagerstown Suns, Bonilla threw 9 scoreless innings, while striking out 12 and allowing no walks. His manager Chris Truby had high praise for the youngster.

"It was as good of an outing as I've seen at this level. And he didn't seem to work that hard," Truby stated.

With a pitch repertoire that includes a fastball that sits around 92-93 MPH, a strong slider and an excellent big league ready change up, Bonilla has proved to be an extremely impressive prospect in the Phillies developmental ranks.

A key to his success is the manner in which Bonilla mixes his pitches and avoids patterns in specific scenarios. In addition, he works quickly and can force batters to get themselves out by guessing his offerings incorrectly early in the count.

Bonilla's strengths, aside from his pitches, are all upstairs. He loves to compete. He wants to give his team a chance to win every time out. He wants to win. And he wants to do all those things at progressively higher levels.