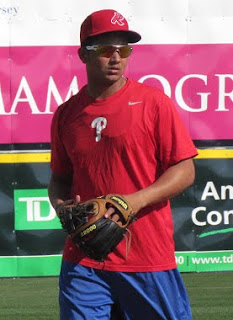 Switch-hitting shortstop Freddy Galvis was previously a player who was consider strong with the leather and lacking on offense, until last season. With some significant strides in his hitting game, Galvis improved his status in the Phillies prospect ranks by a considerable margin.

In 2010, The slick fielding prospect had his time in the Venezuelan Winter League cut short by the Phillies, who sent him to the organization's spring training home in Clearwater, FL to enhance his core. The two-month training session worked, as Galvis added strength which improved his throwing arm and his ability to drive the ball.

Galvis had a terrific campaign during the 2011 regular season with Double-A Reading and Triple-A Lehigh Valley. As a member of the R-Phils, Galvis was extremely impressive, batting .273 with a career-high 8 homeruns through 104 games. That output earned him a promotion to the IronPigs, where he batted .298 through 33 games and helped the club reach the Governor’s Cup finals.

The breakthrough season earned Galvis the annual Paul Owens Award, which is given to the top Phillies minor league player and pitcher each year.

The 22-year-old followed that up with a return to the Venezuelan Winter League, playing for the Aguilas del Zulia. In 47 contests he posted a .249/.308/.333 line with 7 doubles, 4 triples, no homers and 24 RBI. He picked up the pace late, as he sported a .326 batting average with 10 RBI over his final ten contests.

Former Phillie Mark Parent, who managed Galvis with Reading last year, credited the youngster's solid success this past regular season with the increased importance of his at bats, after moving up toward the top of the R-Phils' batting order. Meaningful plate appearances were a great motivator for the 5-foot-10-inch 170-pound Galvis, who refined his mental approach and prospered in a big way.

With above average speed, Galvis swiped a career high 23 bases in 2011 as well, although he was caught 13 times. Galvis has also worked on improving his abilities to bunt for hits.

To further evidence the upgraded bat of Galvis, prior to 2011 he posted lowly .233 batting average with 11 homeruns and 117 RBI in four seasons as a pro.

Galvis, who was signed by the Phillies in 2006 at age 16, is excellent on defense. Exceptional reaction time, great range and a strong arm have always forced baseball heads to take notice of his skills.

With a firm focus on reaching the highest level of the sport, Galvis insists on keeping fun in the game, which allows him to stay loose and enjoy himself.

Phillies brass is high on Galvis, following the tremendous levels of improvement he has shown in the past year and they feel he will be a contributor at the big league level. Expect Galvis to start out the 2012 season back with Lehigh Valley, but consider him on deck if a need arises at the big league level this year.