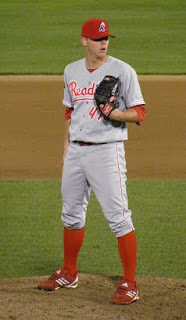 Righty hurler Justin De Fratus, known to his brother Steven and those close to him as "J-Bone", joins us live and direct, once again, from Clearwater, FL to offer his thoughts from inside Phillies spring training.

The 24-year-old reliever went 6-3 with 15 saves, a 2.99 ERA and 99 strike outs in 75 1/3 innings in his time with Double-A Reading and Triple-A Lehigh Valley last year before making his Major League debut in September and holding opponents to a .083 batting average in 5 appearances. Heading forward, De Fratus, an 11th round draft choice in 2007, hopes to be an impact contributor in the Phillies bullpen for years to come.

In the latest edition of The J-Bone Zone, Justin discusses sharing the big league spring training experience with close friends, the Phillies additions of veterans who might present a roadblock for younger prospects and plenty more. Read on for exclusive insider content direct from Florida.


On his ailing elbow that has him sidelined from throwing in the early going and how he's keeping active...

My elbow is still a little sore and we're really just trying to play it on the safe side right now. We just want to take it slow and really make sure that it's ready to go. We don't feel that it's anything serious and there's no reason to rush it right now being that it's February. Trying to catch something before it gets too bad.

I am doing everything full go, aside from throwing. I am doing arm exercises every morning in the trainer's room, getting everything going with the team and far as stretching and conditioning, and doing (pitchers fielding practice). Aside from the long toss part, I am fully involved and I'm part of all the team drills.


On the difference between camp this year vs. his time in big league camp last year...

It's been a pretty cool camp for me...the real cool thing about camp this year is that I really have some of my good friends in camp with me in Austin Hyatt, Jacob Diekman, B.J. Rosenberg and Phillippe Aumont. We've been having a good time together up there. I was in the same draft class as Diekman, so we've been fighting together since day 1. Last year in Reading, I lived with Phillippe and Austin Hyatt and it's really just a good friendship that we all have. I don't look at them as just teammates anymore. There's a strong bond of friendship and we hang out together all the time off the field. So, it's just a really cool thing to get to share this time in big league spring training with them. It makes everything a lot more comfortable, not only for me but for them too. They're all great guys and I want nothing but the best for them. A lot of people ask me about Aumont and compare us, saying, "You guys both project for the same thing, with the same style of pitching." And I'm always telling people, "Hey, the guy's better than me."

I know there's a lot of people that want to know how I feel about competing with him and think it's great. It doesn't matter to me, as long as both of us end up in the same bullpen within the big leagues, that would be awesome!

Valle...everything you read about him is true. I mean he's a great catcher. The guy can hit. I got to play with him in Lakewood a little bit and between our conversations we had then and the conversations we have now- obviously, they're better because his English has gotten leaps and bounds better- but, you can hear the maturity when he talks. You can really see his understanding of the game has really come around and I'm excited to see what he can do because he's definitely gotten all the talent in the world. And even talking with other catchers, they have nothing but good things to say about him. It'll be exciting to see what he can do in Double-A this year, especially in Reading, where it's a hitter's ballpark. Guys like Brian Schneider and Carlos Ruiz, it goes without saying...you know what they can do. But Erik Kratz and Tuffy Gosewisch they're obviously great catchers. It's no secret what they can do behind the plate. Kratz is basically one of my favorite guys to throw to, but they're all great catchers that we have there.


On his outlook over the off-season when the Phillies add veteran relievers like Brian Sanches and Chad Qualls to the mix, and perhaps personally having more obstacles to make it back to the big leagues in 2012...

I don't think about it too much because those are things, as an organization, you have to do. You have to have all areas covered and if I were in the organization's standpoint, you always have to look at, "Are our young guys going to be ready?" And if not, then we want to have some solid, qualified people to fill these roles. And guys like Qualls- he's an established major league pitcher and Sanches had some really good years in Florida. So, you don't even think about that (being an obstacle) at all. You just look at it as a challenge, and you say, "It's going to be fun to go into camp and learn from these guys and compete with them." Also, there are guys who aren't returning. We lost (Mike) Zagurski, he's in Arizona I think now and Scotty Mathieson is over in Japan. You lose a lot of pieces, so not only do you have to fill spots at the big league level, but you have to fill spots at Triple-A, so you have guys to fill in when there are injuries. So, you don't worry about that too much and you understand that the organization has to make sure they have plan B, in a sense.


On new additions to camp making some positive impressions on him in the early going...

I got to watch Jim Thome hit the ball in batting practice on Saturday and he crushes it! His BP is impressive.

And another person that has impressed me is Jonathan Papelbon. It seems like he's not even throwing the ball hard in his bullpen sessions and that thing just jets out of his hand. He's impressive to watch and it's fun. He's a cool dude too. Everybody is kind of impressive in their own right, so it's just a good atmosphere to be around.